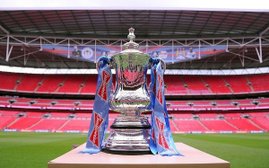 The FA Cup comes to Baldock this week

To celebrate the Club’s entry into this season’s competition, The FA Cup will be on show at The North Herts Arena on Thursday evening.

The FA Cup comes to Baldock this week
Thanks to the efforts of Stuart Hammonds at the Non League Paper, local football followers will get the opportunity to have their photo taken (don't forget to bring your cameras/smartphones!) with The FA Cup from 6.30pm-9pm, at the 3G Football Facility in Norton Road, Baldock.

The Reds make their bow on Saturday 16th August when they make the short trip to the Gosling Stadium in Welwyn Garden City to play Hatfield Town – 3pm Kick Off. The prize for the winners is a Preliminary Round home tie with Ryman League Harlow Town.

As well as seeing the prestigious old trophy in all its glory, you will also get the opportunity to see Scott Grant’s men during their last training session ahead of their Spartan South Midlands League opener with Bedford on Saturday 9th August – 3pm Kick Off at Top Field, Hitchin.