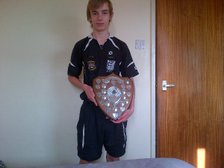 Baldock U18 Templar player Iain Angus has been appointed to officiate at five cup finals over the next two weekends.