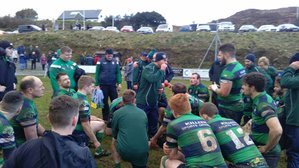 On a roadside in the village of Creeragh in Connemara stands a quiet little church. This evening, a look through its visitors’ book revealed a message of thanks from happy Ballina RFC fans returning from a momentous afternoon in Clifden.
The pilgrims had watched their beloved Ballina win a game which will be remembered for generations and on their journey home slipped into the little church to pay homage to the great clubpeople who had watched the action from beyond the clouds.
Connemara, the land of fjords and flankers, sky-roads and scrum-halves was represented today by a team of talented, powerful young men who came within three minutes of derailing Ballina’s drive towards a Junior League title. Things were that tight, that close, that nerve-wracking. That’s why the victory was so precious and memorable.
There was a huge sense of nervous tension in the large Ballina traveling support before the game began. Defeat would almost certainly have handed the league title to the Connemara men and that would be heartbreaking after months of drive, dedication and desire.
The game began with Connemara backed by the strong breeze blowing straight down the pitch and they attacked from the kick-off. Ballina were under pressure, but they tackled like demons and minded their line like misers with their confirmation money.
An early Connemara penalty from the right came back off the post and was cleared. This intervention by the upright would prove crucial in the end. Eventually, Connemara did open the scoring with a penalty from a central position after 24 minutes but there was no panic in the Ballina ranks as the wind advantage would be theirs in the second period.
However, things took a severe turn for the worst nine minutes later when the Connemara winger raced up the left and blazed over the line. The conversion was added and suddenly it was 10-0.
That set minds racing and Ballina needed to respond. The Mayo side drove into opposition territory and when one of the home second-rows was yellow-carded the chance to score before half time became more obvious.
The Greens drove forward time and time again but Connemara refused to yield and some handling errors and crossing left Ballina still scoreless at the interval.
Everyone knew the following 40 minutes would be remembered for generations and the mental strength of the entire squad was being tested to the limit.
The Moysiders went in search of scores immediately and three minutes after the restart Daniel Molloy answered prayers when he picked the ball from a scrum and raced up the blindside to dot down in the left corner.
Darragh Whyte was just wide with the difficult conversion but Ballina were right back in contention, 10-5, with 36 minutes to play.
Conneamara were in no mood to surrender however and pushed forward at every opportunity. A yellow card flashed to Fergal Tully in the 47th minute was a serious blow to Ballina’s hopes and the home side went for the jugular.
The competition for the football was fierce and fearsome and when Connemara were awarded a 30-metre penalty after 55 minutes the chance to inch closer to the winning line hovered in front of them.
The kick was struck well but the string wind held it up and grateful Ballina arms accepted it under the posts.
That setback didn’t seem to bother the home boys and they drove forward time and time again. Ballina defended heroically and at times men had to put body and soul on the line to prevent a season-ending score.
Eventually, the siege was lifted and Ballina moved up the pitch. Tully had now returned to action and there was great hope along the sideline that the comeback could be completed.
The score didn’t come though and when Richard Morrow was sin-binned with eight minutes left it seemed all over.
Once again, Connemara smelt blood and camped on the Ballina line but they were repelled time and time again as time ticked away.
Then, despite playing with a man less in the very heart of Connemara’s fortress, the Ballina men stood and fought their way up the pitch. Time was ticking onwards and the finishing line was within sight as Ballina moved to within touching distance of the Connemara line.
Then, the home side gained possession and all seemed lost but Mickey Murphy chased down his opposite number and Connemara had to scramble. An attempt to kick to safety was made but Calum Quinn had arrived on the scene and somehow blocked the delivery. The ball squirted over the line and Calum reacted brilliantly. He dived and stretched every sinew to get his hand on top of the leather and touch it down.
The Ballina bench exploded with unadulterated joy and along the sideline the big traveling support went crazy but there was still a serious bit of business to be done.
As all the celebrations continued, Darragh Whyte placed the ball on the tee and from out on the right struck it straight between the sticks to the great delight of the Ballina contingent.
That left the scoreboard reading 10-12 and Ballina were on the edge of a great victory. The excitement levels were off the Richter Scale at that stage and Connemara went in search of the score which would rescue the game for them.
They poured forward but Ballina tackled everything that moved and after what seemed like an eternity the final whistle unleashed scenes of great delight.
To win in Clifden is a rare and wonderful thing and to win in Clifden at such an important juncture of the season is almost unheard of.
Afterwards, the Ballina men reminded themselves that there are two crucial league matches yet to be played and that serious preparation must take place over the next few days, but they did allow themselves a little time to enjoy a very special afternoon in the heart of Connemara.

A special word of thanks to the large contingent of supporters who made the trip to Clifden. Their encouragement at pivotal moments was crucial in the extreme.

Thanks also, to the followers all over the world who kept in contact with the sideline, throughout the game. There were anxious moments in China, Hong Kong and many other places across the planet and joy unconfined when the final whistle sounded.