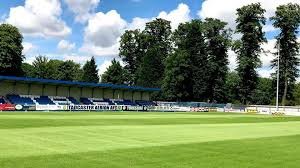 On Saturday Joey Collins and the lads travelled over to Yorkshire to play Tadcaster Albion AFC in our final pre-season friendly. The wet and blustery conditions meant that the teams had to battle hard, although both tried to play football. Brig led at half time through a well taken goal by Ali Waddecar and the match was very much going to plan, with Brig dominating the last 20 minutes of the first half. The team then endured a mad spell when ‘The Brewers’ scored three unanswered goals in the first 5 minutes after the break. Despite Danny Forbes pulling a very good goal back our hosts ran out 3-2 winners. Speaking after the game Joey Collins said ‘the game went well apart from that 5 minute second half spell; when the match gets tough we do need to improve our game management; react quickly when not in possession and be more ruthless in front of goal’.
Share via
FacebookTwitter
https://www.pitchero.com/clubs
Recent news