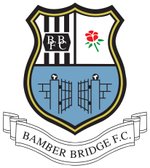 Bamber Bridge FC will be joining clubs across English football in a social media boycott this weekend.

Alongside the Premier League and English Football League, The FA have asked clubs across the football pyramids and grassroots game to join the social media shutdown from 15:00 on Friday 30th April until 23.59 on Monday 3rd May, hoping a unified approach will have a much greater impact in the fight against discrimination in all its forms.

The action aims to to raise awareness of the issues surrounding online abuse and highlight the greater preventative measures required by social media platforms to stop online abuse occurring.

Thank you for your understanding.