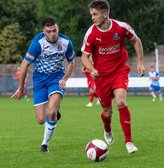 Alan Bateson reports as Brig succumb to their first defeat of the season.

In the impressive surroundings of the Stalybridge stadium, it didn’t take the hosts long to signal their intent, taking the lead in only the 2nd minute of the match. Brig failed to deal with a long ball in to the box, it reached Scott Bakkor who laid it into the path of Matty Wolfenden who slammed the ball home from close range.

Far from being shell shocked, Brig attacked at the other end and forcing the hosts back. They where rewarded on 5 minutes when a corner whipped in from the right was met with a bullet header form centre half, Keiran Charnock giving the home keeper no chance. Moments later and a fine Brig move saw Ali Waddecar receive the ball on the right hand side of the area, he controlled the ball before firing in a fine shot the the home keeper saved well, diving to his right.

The game was now end to end and being played at a frenetic pace with both sides looking dangerous. Brig’s quick passing was causing the home side problems and on 25 minutes, Waddecar was again involved as he twisted and turned in the box before firing across and inviting low cross that flashed across the 6 yard line, just needing the final touch.

Moments later and Ali again was sent racing through, as he shaped to shoot the keeper spread himself well to make the block which lead to a rapid breakaway and Lloyd Rigby in goal for Brig was called upon, saving the day with a fine save pushing the ball out for a corner following a hard low shot.

With half time approaching and the game looking likely to be level at the break, The home side took the lead. A diagonal ball from the left touchline found Celtic Striker Bakkor, who did tremendously well to shake off the challenge of Chris Marlow before firing in a fine effort from the edge of the area. Straight from the kick off the referee blew the half time whistle.

The 2nd half started with the home side looking to build on their lead, and in the opening minutes Brig where put under increasing pressure. Twice in the early moments of the half only great defending and last ditch challenges kept the score at 2-1. Brig made a change just 5 minutes into the 2nd half with Jordan Darr replacing Chris Marlow.

On 60 minutes Lloyd Rigby made another superb save from a 25 yard pile driver, at this stage Brig where struggling to get a foothold in the match as the hosts drove forward looking for a 3rd. In the 65th minute Brig made a 2nd change with Brad Carsley going off to be replaced by James Boyd. Within seconds of the change Celtic did increase their lead and it had been coming. Neil Kengni racing into the box and striking a fine effort that Rigby did well to save, unfortunately for the Brig keeper, the ball rebounded to Kengni who smashed it home.

Any thoughts that Celtic might run away with the game where quashed just am minute later as Jordan Darr burst down the right, cut in passed the full back and laid the ball back to the 18 yard line where Ryan White met it first time. He hard shot took a
deflection completely wrong footing the keeper and flying into the back of the net.

Visibly lifted by the gaol, Brig went in pursuit of the equaliser and enjoyed their best spell of the game, pushing the hosts back and playing some superb football. Jamie Milligan came on for Chris Churchman on 75 minutes as Brig continued to take the game to Celtic. Matt Dawson came close when his 20 yard daisy cutter flashed just wide of the posts.

The home side defended stoutly keeping Brig to shots from the edge of the area and almost made it 4 on the break as a rasping shot cannoned back off the bar.

Brig pressed all the way but in the end succumbed to their first defeat of the season against a very good Stalybridge Celtic side who on the day just seemed to be a bit more streetwise at this level.

Absolutely no disgrace for Bamber Bridge who have once again shown they can compete at this level and played their full part in a fine game that was a terrific advert for the NPL.