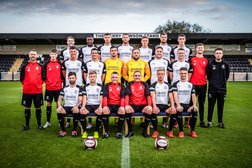 In a chaotic game which saw three penalties and several more yellow cards, it was the visitors who took the lead when James Lawrie converted the opening penalty of the game on five minutes.

Waddecar, who brought up his 449th Brig appearance last night, then levelled the scores with a header on 42 minutes before two penalties were scored late on in the second half to ensure the game ended 2-2.

Nantwich started the game on the front foot and were soon awarded the first penalty of the game, Caspar Hughes brought down just inside the Brig box.

Lawrie stepped up and coolly converted the spot kick down the middle to give the Dabbers an early lead.

Brig then almost levelled the scores when Kieran Charnock headed over from a corner on 10 minutes.

The game then developed into a cagey affair with several fouls being committed from both sides, but as the half wore on Brig came into the ascendency.

Nantwich 'keeper Gregory Hall's attempted kick up the field hit Waddecar inside the box, the forward denied with a good recovery save.

Chris Marlow then attempted a follow up but his effort was well blocked.

Gary Pett then saw appeals for a penalty turned down on 35 minutes, before Brig's pressure finally told seven minutes later.

Marlow produced a good piece of play down the left to beat his man before whipping a ball into Waddecar, whose downward header bounced past the keeper and into the net.

The first effort of the second half went to the visitors, as Hughes's effort from the edge of the box was comfortably caught on the full by Danny Roccia.

Waddecar then had an effort on his right foot which went narrowly wide of the post.

Brig then had another shout for a penalty turned away when Michael Fowler went down in the box, but it was the visitors who were then awarded a decision at the other end on 77 minutes.

Despite protests from the Brig players, Roccia was deemed by the referee to have fouled striker Joseph Malkin as the two players went for the ball.

Lawrie stepped up once again and put his penalty to Roccia's right to restore the visitors' advantage.

The visitors couldn't hold onto their lead for long though, as Brig were themselves awarded a penalty one minute later.

Fowler was fouled by Hall as he attempted to head the ball, and Waddecar made no mistake from the spot for his second of the game.

Both sides then pressed for a winner but neither could find it, meaning the points were shared.