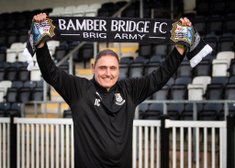 Bamber Bridge FC have this evening announced the new management team who will be taking the helm at Irongate.

Matt Lawlor will remain as part of the management team, but due to accepting a new full time role at Fleetwood Town he has decided to continue to support Joey as 1st team player coach.

In addition to his coaching role, Lawlor will continue as first team captain.

Collins and Lawlor have been undertaking the role of first-team manager on a joint basis since the departure of Mick Taylor in March 2019, and they successfully steered the team out of the relegation zone, finishing the season in 16th place.

“The club have decided to move quickly with the managerial appointments to allow Joey and Matt the maximum time to prepare the team for the upcoming season.   Having successfully managed the team’s survival in the Evo-Stik Premier Division, after a roller-coaster season, the club felt they are the right team to lead Brig in the 19/20 season.

Joey brings a huge amount of experience to the club on the coaching side, with previous experience as both a player and coach with the British Army’s national team and as a coach with Fleetwood Town FC Academy.

Everyone at Brig knows Matt (Lawlor) as a player, but he shown his coaching ability since stepping up to the role of player/coach and most recently joint interim manager.  The club are delighted he’s agreed to continue as part of the management team alongside his role as first team captain.'

The club also confirmed that Stuart Barton and Mac Taylor will also continue their roles on the coaching staff.