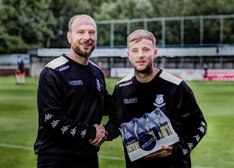 Defender receives the first awards of 2019/20

Adam Sumner has been named as Manager's Player of The Month for August 2019.

The left back has impressed both coaching staff and supporters with his consistency and commitment since joining the Brig squad in the summer and has been rewarded with the first Player of the Month Award for 2019/20.

Adam was presented with his award, a case of beer from the award sponsors, Bowland Brewery, before Tuesday night's 3-0 victory over Atherton Collieries.

Picture: Adam Sumner is presented with his award by Assistant Manager/Captain Matthew Lawlor