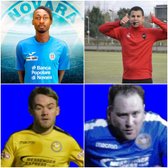 Bangor City Football Club is delighted to confirm the signings of four new players.
The club has further bolstered its squad, despite the influx of new talent already, with three Brits among those signing on the dotted line.
Emmanuel Agyemang, a 21-year-old who can play anywhere across the forward line and in midfield, comes after a prolonged spell in Italy with Novara which also included a stint at Mosta in Malta where he was on loan towards the back end of the 2017-18 campaign.
Lewis Foster, who came through the youth system at Crewe Alexandra before putting pen-to-paper on a two-year scholarship with Salford City, joins the club after leaving the Class of 92-led outfit at the end of last season.
The versatile 18-year-old can play at right-back, centre-back or even as a defensive midfielder and has also trained with Fleetwood Town and Tranmere Rovers.
“Emmanuel is a big, strong attacking player with real athleticism. He’s someone I’d seen on-loan at Mosta, he’s impressed while he’s been on trial and will be a good addition to the squad,” manager Stephen Vaughan Jr. said. “Lewis is a player who has really impressed over the past week, has good grounding with coming through Crewe’s youth ranks and he can play in a number of positions. Only just 18, he is someone whose development I’m looking forward to keeping an eye on.”
Joining Agyemang and Foster at the Citizens are Harry Blackburn and Paul Cliff.
Blackburn, 20, comes in from Clitheroe where he was together with our newly-appointed assistant manager Dave Mannix. He can play as a striker or in the wide positions.
Finally, ‘Cliffy’ is a 28-year-old Liverpudlian who has been added to the ranks from Skelmersdale United. The defender, who can also play in midfield, will be well known to Welsh fans after spells previously with Rhyl and Holywell Town.
The club is excited about the latest spate of new faces.
“With the additions of ‘Cliffy’ and ‘H’ –– who I believe will do very well for us –– it takes our squad to 19 players for the new season. We will look to add one or two more before the start of the new campaign. We have trained hard over the course of the last week in Liverpool and look forward to the forthcoming pre-season fixtures.”
The club would also like to welcome Gennaro Cuomo, a goalkeeper from Italy, as well as Massimo De Maria.
Share via
FacebookTwitter
https://www.pitchero.com/clubs
Recent news