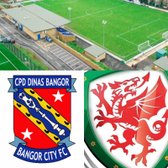 Bangor City Football Club have today won the appeal of a 21-point deduction imposed on them by the Football Association of Wales.
Furthermore, they also challenged an additional charge placed upon them.
The club, represented by Christopher O’Neal, can confirm that the appeal, which took place in Birmingham, was 100 per cent successful and the further charge was not proven.
“This is the conclusion of a long, drawn-out battle with the FAW,” said the club’s representative. “The Association furnished upon the panel in excess of 1000 documents. Despite this, we have proven the case in favour of the club and we look forward to the forthcoming season.
“For the integrity of football in Wales, we now hope that the FAW will consider the findings and make peace with us as a member club.”
The club will now prepare for its first fixture in the JD Cymru North League, with further details on that matter to follow.
Stephen Vaughan Jr., the club’s manager, is delighted with the outcome and now wants to focus on on-pitch matters.
He said: “It’s now time to start playing some football, to put this behind us and begin our League programme.
“I would just like to put on record how appreciative we are to Chris O’Neal who has represented the club throughout this process with absolute class.
“We’ve prepared well and the lads have been excellent in not letting anything but football come into their minds. They’re raring to go.”
Share via
FacebookTwitter
https://www.pitchero.com/clubs
Recent news