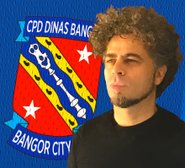 When asked whether I would be interested in becoming involved in the club, it was something I immediately jumped at
Domenico Serafino
Bangor City Football Club is privileged to announce that negotiations to transfer the ownership of the club are over and have been formally completed.
Domenico Serafino, along with a consortium of investors, has agreed a deal to buy Vaughan Sports Management’s (VSM) shares in Bangor City FC.
Italian-born Serafino is a professional musician and producer and will become the chairman and person of significant control within the club.
The 52-year-old has been in negotiations for a few months with directors of the club and is the representative of a group of entrepreneurs who have been convinced by him to make a major investment in the club.
Their vision is to bring the club back up to the Welsh Premier League and give prestige again to the city of Bangor.
“When asked by the director of football Max Leghissa whether I would be interested in becoming involved in the club, it was something I immediately jumped at,” said Serafino, who will replace first-team manager Stephen Vaughan Jr. as the club’s chairman. “Having spent some time around the city while my son Francesco was training, I fell in love with the beautiful landscapes and the history of the surrounding area. Now there is lots of work to do and I have been lucky enough to persuade other investors to come and help with this project and to help try to restore the club to where it belongs.”
The vision for Serafino is to reconnect with the supporters and local community –– but he understands that there is a lot of work to be done and it’s a challenge he’s more than ready to take on.
“We have lots of work to do on and off the pitch and we have already started work behind the scenes to get stability back in the football club,” he concluded.
Outgoing chairman Vaughan Jr. is delighted with the news.
He said: “Since the turn of the year, we had actively been looking for investment for the football club to take the club forward. Max had introduced me to our now-new chairman Mr Serafino when young Francesco had impressed while on trial at the club during the close season.
“After a few months of negotiations both here and in Italy, a deal has now been struck and this safeguards the 143-year history of the club.
“Mr Serafino, along with his investors, have the vision to take the club forward and now we just need to let them get on with the job at hand while we get a team onto the pitch we can all be proud of.”
Now the deal is complete, please be assured we intend to do all within our power to bring back a true sense of pride to Bangor City Football Club, which is the least the staff, fans, future generations of supporters and the community deserve.
Share via
FacebookTwitter
https://www.pitchero.com/clubs
Recent news