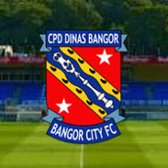 Bangor City Football Club is delighted to announce that it has agreed terms to play a final pre-season friendly later this week.
The club, which has had fixtures against Mold Alexandra, Hednesford Town, Ashton Town, Gwalchmai, Chirk AAA and Llandudno Albion as it looks to prepare for the fast-approaching 2019-20 JD Cymru North campaign, will play Tranmere Rovers’ u23s side at the Eurogold Stadium on Saturday.
The fixture will kick-off at 2pm and will be the first to be played at the club’s home since work began to renovate the pitch at the back end of last season.
It will come just seven days before the curtain-raiser of the new season, at home to Colwyn Bay, on August 17.
Entry for the match will be priced at just £2.
Share via
FacebookTwitter
https://www.pitchero.com/clubs
Recent news