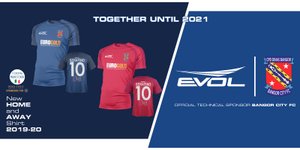 Bangor City Football Club is delighted to confirm a new technical sponsorship, licensing and merchandise agreement for the next two seasons.
The club had originally revealed an agreement with Italian giant Errea for the technical sponsorship, licensing and merchandise agreement, but has decided to move elsewhere.
The players at the Eurogold Stadium next season, and the 2020/21 campaign, will don Evol merchandise after a new deal was reached.
“After travelling to Italy a couple of weeks ago with the club’s new director of football Max Leghissa, I was introduced to a representative of Evol who offered us a deal we couldn’t refuse to become the club’s technical sponsor for the next two years, providing us with an excellent quality of kit as part of the licensing and merchandise agreement,” said the club’s chairman Stephen Vaughan Jr.
The new kit will have the Lily Foundation logo at the top on the back of the numbered shirts, with Eurogold remaining as the main shirt sponsor.
"We are delighted to have been named the new technical sponsor for the Welsh club Bangor City FC, which participates in the Welsh Championship North but has won championships, Welsh cups and participation in European Cups such as the Europa League and Champions League.
"We will provide the customised technical material for all members of the club, taking care with particular attention to details and materials, the true prerogative of the brand.
"The 'made in Italy' production of official competition uniforms will serve to make the Bangor City FC even more exclusive, respecting its glorious tradition."
Vaughan Jr. added: “I would like to make a formal apology to the representatives at Errea, who we had agreed to go with this season and had announced as our shirt manufacturers for the forthcoming season, but as I’ve mentioned above, the Evol deal was too good for us not to take advantage of.”
Share via
FacebookTwitter
https://www.pitchero.com/clubs
Recent news