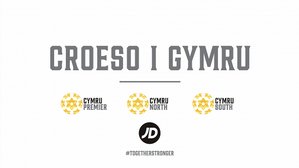 The Football Association of Wales has announced a new brand identity and sponsorship deal for the top two tiers of the men’s domestic game.
Forty-five clubs from across the country will come together as one community, under a new identity: the Cymru Leagues.
‘Cymru Premier’, the newly named top tier of Welsh football, will form the peak of the new pyramid system. ‘Cymru North’ and ‘Cymru South’ replaces the Huws Gray Alliance and Welsh League Division 1 respectively, with both leagues coming under the FAW’s jurisdiction for the first time.
JD will continue their support of Welsh domestic football by becoming the title sponsor of all three divisions, which will henceforth be known as the JD Cymru Premier, JD Cymru North and JD Cymru South, with JD Cymru Leagues becoming the overarching name for the leagues.
The three leagues encompass every corner of Wales, which is why the new bilingual naming system places ‘Cymru’ at the heart of Welsh football.
Alongside the naming system, a new visual identity has been created for the leagues. A key component of the FAW’s brand identity, the daffodil, has previously been used to represent the 11 players of the national teams and will now be incorporated within the Cymru Leagues.
Seven daffodils, each representing one of the seven leagues of Welsh domestic football’s top three tiers, upon completion of the pyramid restructure, come together to form the striking ball logo.
The recent success of our domestic teams has captured the true Welsh spirit of supporters across the country. A radical departure from past identities, the modern logo reflects the modernisation of the new pyramid structure and the future ambitions of Welsh football.
JD recognises this and has been a partner of Welsh domestic football since 2015 and the new deal sees the FAW’s partnership with JD cemented for the next seven seasons, with the sponsorship running until the 2025/26 season.
Share via
FacebookTwitter
https://www.pitchero.com/clubs
Recent news