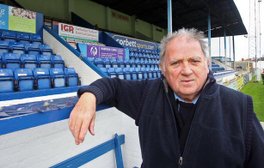 Bangor City Football Club is saddened to confirm that Gwyn Pierce Owen has died, aged 85.
The well-loved former club chairman, an ex-head teacher, was a Football League referee during the 1970s and 1980s.
He also took charge of internationals and games in European club competitions.
‘GPO’, as he was affectionately known, served as club president and the main stand at the club's Eurogold Stadium was named in his honour in 2014.
The thoughts of all at Bangor City Football Club are with the family and friends of the stalwart, who loved the club and was loved by the club.
Share via
FacebookTwitter
https://www.pitchero.com/clubs
Recent news