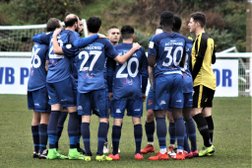 Despite the dreary weather and gloomy sky over Bangor on Saturday, the Citizens were left smiling after another positive result. The City side ensured their current form continued as they extended their unbeaten run to 4 games.

We faced a bottom of the side Llanfair United, who came to Nantporth searching for some much needed points. Despite a rather dominant performance from the home side, creating enough chances to put the game to bed early, and secure the 3 points, the game was settled by a single Vieira goal on the 63rd minute, as the match ended 1-0 to City as United battled on with 10 men.

From the off Llanfair United were forced to defend with resilience as City wing-back Sammartino surged up the left flank on multiple occasions and whipped numerous teasing balls into the box. The opening chances for the home side came through Sammartino in the most part, with his shot from the cusp of the box being the closest chance of the opening 20 minutes of the match. Despite coming agonisingly close to scoring on the 28th minute, as City created a string of chances inside the Llanfair United box, the game remained goalless as the Citizens couldn’t seem to make the chances count.

The match sat goalless until the 63rd minute, despite the Citizens entering the second phase upping their game. Straight away City carved what could’ve been a great goal scoring opportunity as Serafino pinged a ball to Cauterucci on the left flank who proceeded to then dart behind the fullback and play a cross into the box. However, similarly to a lot of our chances in the first half, nobody latched on and put the chance away.

The second half saw countless chances as City looked to open the scoring, a few in which were agonisingly denied a goal through great goalkeeper such as Rea’s two headers at goal and Agyemang’s squared ball to Serafino whose shot was blocked close. Despite these chances, Llanfair's 'keeper ensured City would not romp to a victory.

The game took a dramatic turn on the 52nd minute as Llanfair United were reduced to 10 men as their number 6 received a second yellow for handball. With a man down, and City pressing for the opener it was only a matter of time before the net was found. On the 63rd minute Captain Pavel Vieira fired home from close range to make it 1-0, a De Maria pass rebounded off the United defender for Vieira to fire home put us ahead.

Chances followed the Vieira close range goal as we searched for our second, Delvecchio's charged shot sent flying towards the Llanfair ‘keeper, and matched with a great save, along with a acrobatic kick from Thomas as he attempted to fire home a Sammartino cross to name a few. Further chances fell to City as the final whistled edged closer and closer, however it would be the away side who would have the final clear cut chance of the game as they rattled the the City post with a free-kick that narrowly avoided the back of the net, a big let off for the Citizens so late in the game.

Moments later the whistle blows and the Citizens secure the 3 points as Pasculli secures his second league win for City. Despite being in control for the 90 minutes and creating plenty of opportunities, we lacked a clinical edge upfront as many a chance went begging. Regardless, it was 3 points added to the league table and an extension of our turnaround in form as we make it 4 games undefeated out of 4. Speaking to Pasculli after the victory he placed great importance on the team effort as the players begin to understand each others styles of play and begin to find their feet in the league.