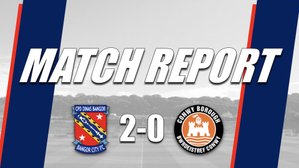 Extending the positive run of home form, the Citizens made it 5 games undefeated at Nantporth.

An emphatic victory over Conwy Borough saw the Citizens advance up to fifth place in the JD Cymru North table this week, following a gap in our fixtures, as Storm Dennis wreaked havoc.

On a wet and windy Tuesday night, the Citizens looked to set about continuing their positive form, following a strong performance away to Llandudno, as they welcomed Conwy Borough to Nantporth. In recent weeks we have spent some time on the road, with our last three fixtures being set away from home. With only two home matches played so far this year, the home dressing room was a welcome site.

Following on from our 2-0 win over Llandudno, in which Goicoechea netted twice, we saw an almost unchanged starting XI face Conwy Borough. Pasculli once again opted for a tried and tested 433, which is proving to be an effective set up for the Citizens. With Simone Rea, one of the first names on the team sheet for Pasculli, being sidelined through a four match suspension, we saw Lucas Surber enter the fold, our only change from the Llandudno clash.

Despite a positive start to life at Bangor, neither Wealth nor Boss started, with the Argentine coach Pasculli opting for Cauterucci on the wing. A somewhat topical selection, however one that proved worthwhile in our last fixture with the central midfielder producing two assists.

The game started well, a lively start for the Citizens with the majority of the opening play falling in our favour. It was obvious from the off the team had their eyes set firmly on netting an early goal. Within the first minute, we were gifted an early chance in the form of a free-kick. A daring ball is whipped in from Placeres, narrowly avoiding forward Agyemang, as a switched on Conwy defender marks well and clears the ball for a corner. Minutes later another free-kick is awarded, in almost the exact same position. At this point the tempo was set, and it was clear that Conwy were ready to battle, and weren’t going to be turned over easily.

The lively start continued, this time the opportunity falling to Conwy’s McGonigle as he latched onto a Tobler mistake. After giving the ball away cheaply, Tobler allowed McGonigle an opportunity to dart into a dangerous position, something the Citizens needed to avoid. It would have certainly been drilled into the City defenders, by Pasculli, to at all costs stop the emphatic McGonigle. Recovering from his error, Tobler sprang into action and pulled off a great tackle to put a stop to the counter.

With Tobler putting a stop on any chance of McGonigle breaking one end, we had the Conwy ‘keeper Huw Shaw at the other end, preventing a cheeky Cauterucci back heel. All stemming from a plucky Goicoechea throw that found Serafino in behind the backline, who then follows up with a powerful ball placed onto the Conwy shotstopper. A difficult ball to deal with, he drops it for Cauterruci stood yards in-front, a cheeky attempt on goal as the number 5 tries to back heal the loose ball goal bound but see’s the effort cleared off the line in a tense moment for both sides.

As the first half developed we saw Goicoechea continue his fine run of form, having bagged two goals away at Llandudno, and the Man Of The Match award, the left back was proving yet again his value to the team. Demonstrating on countless occasions his trustworthy defensive capabilities, as well as some fantastic attacking opportunities being produced from the fullback to. Whether it was whipping in crosses, or blocking them, Goicoechea was was the man for the job as he put in a great 1st half shift, that lasted the length of the match.

On the 38th minute, similar to a previous chance for the Citizens, Goicoechea plays in Serafino behind the Conwy Borough back four. With great speed and agility the number 10 wastes no time in charging into the open space before pulling it back for Santiago Chacon in the box, who he finds with an inch perfect pass. What followed was an unbelievably calm finish that left us all stunned. The stunning strike found the back of the net as it flew passed the goalkeeper, leaving him no chance of reaching it. The Citizens were up by a goal, and had gained a deserved lead.

On the cusp of the first half, moments before the whistle is blown, the goalscorer Chacon attempts to carve out a second, and comes close to! With some impressive tricky feat, he dances past the opposition and finds himself on the edge of the Conwy box, in a split second, he lets loose a simple but effective pass that plays Goicoechea in behind the Conwy leftback, a theme of the night. The defender whips in a great cross for Chacon, but some equally solid defending results in the danger being swallowed up. Moments later the whistle sounds, the fans applaud as the home side retreated inside from the ever worsening weather. A first half of plucky passes, great vision and topped by a superb finish, saw the Citizens enter the break leading, and in a comfortable position being on top of the away side for the first 45 minutes.

The Citizens momentum carried on into the second half, as we continued to play some impressive football, as the newly revamped midfield showcased some outstanding passing. It was hard to imagine the match remaining 1-0 with the quality of football we were playing. On the 66th minute, the crowd were left in amazement and disbelief as Hugo Colace came agonisingly close to doubling the lead. Being played into a one on one situation Colace slapped the ball fiercely, but the Conwy ‘keeper stood tall, the deflected shot fell back to the midfielders feet who let off a second from close range only for it to bounce off the post, once again straight back to his feet. With the ball falling back into his possession for the second time, it was difficult to see him missing. However, it seemed his luck had ran out as his shot was sent narrowly wide. The crowd were stunned, it really should’ve been 2-0. Nonetheless, the Citizens were adamant on doubling their lead, and ensuring the match would end in their favour.

It was on the 80th minute mark we would see the teams patience and work rate pay off, as a blisteringly quick Agyemang was played into space and within seconds broke into a dangerous position. Forcing the ‘keeper to make a decision, to stay on his line, or to come out and act. With quick feet Agyemang knocked the ball passed the flying showstopper as he looked to take the ball around him, and sending himself in on an open goal. However, a moment of poor judgement lead to the Conwy goalkeeper fouling the towering forward and giving the referee no option other than to award a deserved penalty. Stepping up to take it was vice Captain Francesco Serafino. Despite missing his last shot from the spot, the winger loomed over the ball with confidence and sent the ball into the back of the net, doubling the City lead, sealing another win. In the remaining 10 minutes of the match the Citizens were still eager to score, with Agyemang coming close after a brilliant run he unleashed a shot that tested the Conwy goalkeeper, as he searched for the far corner of the goal.

The whistle was blown and we had secured the win, claiming a vital 3 points that would see us push up the table and into 5th place. With some great football on show during the 90 minutes, it made for a difficult choice when deciding upon who to award the Man Of The Match award to. There was a case for a few of the players as to why they should claim the award. Lucas Surber was Captain Hugo Colace’s choice after a solid display at the back, as he stepped up massively to replace the suspended Simone Rea. Then there is Esteban Goicoechea, who was my own choice, as media officer, following yet another great display in defence, producing some fantastic surging runs forwards, playing a key role in the opening goal and also preventing chances at the other end. It was definitely a difficult decision, Francesco Serafino had grabbed yet another assist and converting from the spot, making it 8 assists and 9 goals in all competitions this season, whilst Santiago Chacon had put on a scintillating display in the centre of the park and producing a fantastic goal. Therefore, we left this headache to our mascot Tomo, who relished the opportunity to pick the Man Of The Match. The youngster and Citizens Youth Development Centre player went for Santiago Chacon, resulting in the new signing scooping up his second Man Of The Match award.

After the match, a sense of excitement flooded the stadium as the Citizens had leapfrogged up into 5th position. The win also marked us as undefeated at home in our last 5 fixtures, the last time we suffered a defeat at Nantporth was back in November 9th, where table toppers Prestatyn knocked us out of the Welsh Cup. The loss at the hands of Prestatyn seemed to mark a turning point, following a run of poor form Pasculli and co have since gone on a run of 11 games succumbing to only one loss.