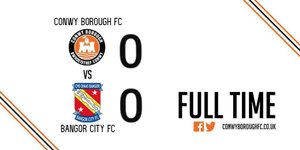 BANGOR City finally got their JD Cymru North campaign underway with a 0-0 draw away at Conwy Borough.
The club returned to competitive action following a lengthy dispute with the Football Association of Wales that ended with a successful result from their recent arbitration hearing, but they had to be content with a share of the spoils against the home side at the Y Morfa Stadium.
City faces another busy week of second-tier action that begins with a home tie against Buckley Town tonight, at the Eurogold Stadium, before they make the short trip to Porthmadog on Saturday.
Manager Stephan Vaughan Jr. said: “A 0-0 draw is not really what we wanted, but credit to Conwy Borough who frustrated us throughout.
“The season has started and [we have] two big games coming up this week.”
A cagey opening to the contest saw Welsh system veteran Ashley Ruane booked for protesting a penalty appeal to the dislike of the referee, with a superb Corrig McGonigle delivery narrowly evading the head of Sean McCaffrey at the other end.
The competitive affair saw plenty of robust challenges from both sets of players that resulted in yellow cards for Rob Jones and Francesco Serafino, but despite both sides enjoying large portions of possession after the interval neither were able to create a significant chance