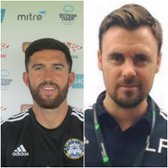 New Bangor City boss Stephen Vaughan Jr. has been joined at the Eurogold Stadium by David Mannix and Luke Purcell

Assistant manager Mannix, who will double up as the club’s academy director, is well known to Vaughan Jr., with the pair having played together at Liverpool.
First-team coach Purcell continues with the club following the departure of Gary Taylor-Fletcher and will carry on helping with the day-to-day running of the football club as well as assisting with the academy when needed.
Here, we take a look at the background of the two newest members of the coaching staff…
Born in Winsford in Cheshire, Mannix –– a midfielder by trade –– was at Liverpool as a youngster and was on the podium in 2005 when Steven Gerrard lifted the Champions League trophy in Istanbul.
He has his own football academy setup in the shape of Platinum International and has previously held roles at Clitheroe (assistant manager) and played for Rhyl, Warrington Town, Colwyn Bay, and Chester City.
Mannix has worked at Liverpool’s academy setup and even played with Vaughan Jr. at the Merseyside club from the age of 12 before spells at Accrington Stanley and Vauxhall Motors while also appearing for England’s youth sides on a number of occasions.

Purcell –– born in Tottenham, London –– has been involved in football for more than 20 years.
The 37-year-old signed youth forms at Fulham but started in earnest at Northampton Town before spells at Barnet, Dagenham & Redbridge, Canvey Island, and Kingstonian.
He has also been assistant manager to Alan Lewer at Southport and held the position of academy manager at Southend United.
The opportunity arose, shortly after leaving Southport, for Purcell to join Bangor City and he took it.
Initially, he came in as the business development manager at the club but has since held the role of general manager and has now been appointed as the first-team coach and will assist Mannix and Vaughan Jr. regarding on-pitch matters.