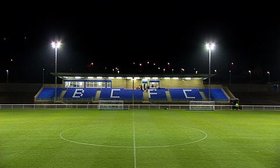 A round up of November for the Citizens

The Citizens got off to a poor start in November, a shock defeat to Guilsfield in the league and succumbing to another defeat to Prestatyn Town in the Welsh Cup a week later. Two fixtures into the month and it looked set to be a tough few weeks for Pasculli and co. However, despite form in the opening fixtures, City underwent a turnaround in form which has carried on through to December.

The two defeats in the first two weekends of November would have made any Citizens despair, especially in the manner we did so. Against Prestatyn we witnessed further poor disciplinary as Yalany Baio and captain Pavel Vieira were dismissed from the field, dashing any hope of a positive result. The following week we played Guilsfield, a game City fans were hoping for all three points from but were met with a gut-wrenching loss. It was clear that a stark turn around in form was needed if we were to scale the league table and amount a respectable finishing spot this season. With teams around us picking up points as we dropped vital ones, we needed some positive results desperately.
Following on from the Prestatyn loss City were at home to Gresford, who were hopeful of an upset after witnessing the Citizens go three games defeated. They looked set to get their upset as a dubious penalty decision gave them an early lead, moments later influential fullback Dalia received his marching orders, seemingly throwing any chance of success for City in disrepute. Fans were left slightly bemused in the second half as centre half Simon Rea found himself venturing as a striker, however a move that would pay off greatly. A stroke of tactical genius, as the defender who has been lethal from set pieces, nods on a De Maria long ball deep into the box for Cauterucci to poke it home to equalise. What would follow was a stark contrast in character to the first half as the Citizens put in a valiant shift and demonstrated their hunger to secure a much-needed point as they dug in deep. A superb effort from goalkeeper Brino kept the game level with some outstanding saves that would warrant him a place in Sgorio’s coveted Team of the Week. The whistle blew and City had secured the needed point that untoward to them would be the catalyst for a turnaround in form.

Next up for City was an away clash against fierce local rivals, Rhyl. No matter what our form had been previously, this game was a matter of pride and a positive result was a must. Pasculli headed up the coast seeking his first league win, following our string of losses, poor results and missing our top goal scorer Serafino, the odds were stacked against us. The starting line up witnessed a shake up to our previous matches as Francesco Leghissa replaced the suspended Serafino, and captain Pavel Vieira returned from suspension. However, the biggest change was fullback Sammartino being deployed at right wing, a decision that would prove fruitful.

On the 34th minute we took the lead through Agyemang’s quick fire reactions as he pounces on a loose ball inside the box. Despite his goal being disputed by the linesman, who deemed it offside, the referee waved away the decision, and the following appeals from the Rhyl players, and the goal stood. However, the lead didn’t last long as only four minutes later Sam Molyneux headed home for Rhyl to equalise. Despite coming close to taking the lead themselves, it was Rhyl who succumbed and entered the second half trailing. On the cusp of the 45th minute a superb cross from the left footed fullback Sammartino finds Rea in the box whose fierce headed effort put us in front.
Despite an action packed first half, with three goals in the latter stages and chances littered through the half, the game would end 2-1 to City as they headed home with the spoils. If the first half showcased our attacking strength, then the second half was all about our defensive resilience as Pasculli’s men held onto the win, as the coach earned his first JD Cymru North victory.

Our next challenge was facing high flying Colwyn Bay away, upon a cold and blistery night it was set to be a tough fixture. Despite starting strong, with Francesco Leghissa surging in on goal, his shot was saved comfortably by former City goalkeeper Coughlin, it was the Seagulls who would take their chances first. Through a City blunder in the back, the Bay were let in on goal and wasted no time in scoring. Despite being on the back foot, a goal down, we kept on battling, and our break came when Delvecchio found himself in on goal, his calm and collected finish slotted in the back of the net made it level at the break. Much like the Rhyl game the second half was goalless as neither side could take advantage of their chances and the match remained a 1-1 draw.

Despite a difficult start to the month, entering it in poor form and lacking confidence as frustration clearly seeped in with numerous red cards, we entered December in stark contrast. City seemed plagued with poor disciplinary early in the month, as we received three red cards in our first two matches and a handful of yellow cards to. However, come the end of the month, on our final game we finished the game with no bookings, a positive step for the fiery side. We entered December in good spirits as we witnessed a turn around in form, despite this being a catch up on November it must be acknowledged that our first game of December against Llanfair United was Pasculi’s second league win as the Citizens extend their unbeaten run.

November was a turbulent month for the Citizens, as we witnessed lows in our crushing defeat to Prestatyn and a shock loss to Guilsfield, however despite the poor start and low confidence, the lads dug deep and pulled off a great turnaround in form. We finished the month in a far better position than we entered, as we entered December undefeated in three matches, which might not seem like much, but in contrast to our run of three successive defeats earlier in the month, it is a great boost.