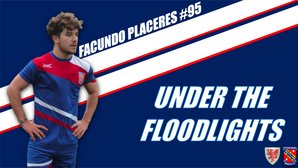 Under The Floodlight: Facundo Placeres

Under The Floodlight: An in-depth look at all-round midfielder Facundo Placeres

With the postponement of our fixtures for the foreseeable future, we thought it was a perfect opportunity to shine the spotlight, or floodlight, on our team!
Over the next few weeks, each day we will be focusing on an individual player, posting videos, interviews and more...

As we take an unexpected break from games, with our fixture schedule being halted due to the current global situation, it’s the perfect opportunity to reflect on the season so far. In particularly, the hard work and effort our players and staff have put into the club.
With the postponement of our fixtures for the foreseeable future, we will focusing our attention on the individuals within our team that keep us ticking, on and off the pitch. As we put the team under the spotlight, or floodlight, we will bring you a different individual each day, with exclusive interviews, videos and more!

Today we focus on the Uruguayan, Facundo Placeres, who has been playing in top gear since his arrival in January. The sheer talent of the central midfielder was apparent upon his arrival at the club, as he earned the Citizens’ Player Of The Month award in January, during his debut month in Wales.

With a passing range that any playmaker would envy, Placeres has become a vital member of the midfield three that has been at the heart of our recent positive form and success on the pitch. Linking up with fellow South Americans Hugo Colace and Santiago Chacon, the trio have put on some stunning displays for fans as they pass the ball with ease between themselves. Despite his short stature, his determination and physical strength is evident, willing to graft and battle to regain possession. Combined with his ability to spray inch perfect passes from deep make him a dangerous asset in Pedro Pasculli’s arsenal. Former Argentine youth international, and club captain, Hugo Colace commended the midfielders vision, and ability to not only play a great ball, but also picking out the right pass. He went on to applaud his ability to switch between his dominant foot and his weaker foot with ease.

During an average 90 minutes, Placeres can be seen dribbling his way around opposition players, springing attacks with pinpoint accurate passes and a creative spark that makes his game so entertaining to watch. However, despite his playmaking qualities, the midfielder has another, more fierce side. Although not a towering presence in the centre of the park, his tenacity and strength certainly make up for that. His willingness to carry out his defensive duties alongside his attacking, allows Colace and Chacon to push up further and create problems higher up the pitch. Being a well rounded player, having the talent to defend well alongside attack make him a danger to opposing teams.

It's apparent how his talent and willingness to carry out multiple roles within the team has lead him to finding a regular spot in the starting lineup week in, week out. Alongside his apparent talent, a side fans perhaps don't see, is a hardworking individual who gives his all in training whilst also learning to acclimatise to a new country and culture, whilst also adapting to an entirely new team and style of play.