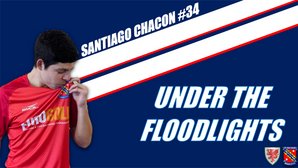 Under The Floodlight: Santiago Chacon

Add quick feet, silky skills and a whole lot of flair, what do you get? Santiago Chacon, that's what!

Today's Under The Floodlight takes a look at the Argentine playmaker Chacon, who upon his arrival at Bangor made an instant impact, following his transfer in January. Hitting the ground running, Chacon topped off his faultless debut against Llangefni Town with a Man of The Match award, as chosen by the fans. His popularity with fans has only increased since, with his performances matching the high standards he set in his opening game.

Beginning his footballing career at prominent Argentine side Huracán, who currently play in the Premier Devision, Chacon went on to ply his trade in the Premier Devision of Uruguayan football, along with the 2nd Devision in Greece. Despite only being 27 years old, the central midfielder has a wealth of experience, his ability to adapt to new leagues and cultures has proved vital in his smooth transition to life in Bangor.

Chacon found his feet quickly, upon his move to North Wales, grabbing the Man Of The Match award against Llangefni Town, and following it up with a decisive equaliser against Corwen to win a hard earned point, two games later. A composed header, pouncing on Serafino’s rebounded shot, from the number 34 saw the Citizens pull back a point away from home in difficult conditions. A flawless debut from youngster Wealth meant a second Man Of The Match alluded the midfielder. However, it didn’t take long for him to secure his second. A blistering performance, topped by a fantastically taken goal, against Conwy Borough saw him awarded his second Man Of The Match award, chosen by our Youth Development Centre player, and mascot, Tomo!

Two goals and two Man Of The Matches in his opening five games is evidence enough of his timely impact at the club. Linking up with fellow South American’s Hugo Colace and Facundo Placeres, Chacon has formed a trio that has left fans starstruck. His flair, superb skill and footwork that allows him to glide over the pitch effortlessly, make him an absolute delight to watch. His link up with Colace and Placeres being a key factor in the Citizens recent resurgence of form.

With his brilliant vision, matched by his ability to create chances out of nothing, and in depth passing range make him a natural playmaker. Throw in his ability, flair and quick feet, along with his eye for a goal, and he becomes a dangerous asset to have sat behind the attacking front line. Despite only signing in January, the midfielder has certainly made himself one of the first names on the team sheet, whilst also adhering himself to fans with approachable and friendly nature off the pitch. The number 34 has impressed hugely with his entertaining brand of football on the pitch, but also his ability to engage and bond with fans off it.

I for one can’t wait to see what else the exciting midfielder has in his locker.