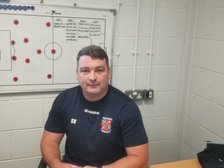 “This season is all about stability for us..."
Stephen Vaughan Jr.
Bangor City Football Club is delighted to announce the appointment of Stephen Vaughan Jr. as the club’s new manager.
The former England youth international defender, 34, will take charge of the Citizens for the foreseeable future.
Vaughan Jr., who is also chairman at the football club and has held a previous role as director of football, will be joined at the Eurogold Stadium by David Mannix, who has taken up the position of assistant manager and will double up as the club's academy director, and Luke Purcell, who has been appointed as first-team coach.
The club’s coaching staff have joined the newly-assembled first-team squad in Liverpool for a week-long training camp.
Vaughan, who had an interim spell in charge at the club last season in which he won all of his five games as well as having previously held a role at Mosta FC as assistant manager, started his career at Liverpool, playing reserve and youth football, before being released in 2004 having played over 70 reserve games. He represented his country at under-15, under-17 and under-19 level.
Shortly after leaving Liverpool, Vaughan Jr. joined Chester City under the guidance of Mark Wright. He quickly became a regular at the Deva Stadium and stepped upstairs to join the hierarchy of the club in 2009.
He was made Chester's captain at aged 21 and made more than 50 league appearances for the club before spells at Rochdale, Droylsden, Northwich Victoria, and Boston United.
“This season is all about stability for us,” said Vaughan Jr., who takes over from Gary Taylor-Fletcher who left the club for Llandudno shortly before stepping away from management. “I am excited about the prospect of taking over as first-team manager. Having had two years with the under-19s and a short interim spell leading the team as well as working in Malta’s BOV Premier League on a full-time basis, I feel that I am ready now to lead the team.
“With the foreign players brought in, as well as the crop of British players we have training with us at present, we will look to have a competitive side in the league.
“There are a number of good quality sides in this season’s league and I am confident that after a good pre-season schedule I can –– with the help of my staff –– put a competitive side out on to the pitch on a weekly basis.”
Share via
FacebookTwitter
https://www.pitchero.com/clubs
Recent news