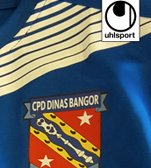 Two goals from Adam Evans, one in each half, plus a second half Guto Williams strike were enough to see Bangor City Reserves register their eighteenth win from nineteen starts as they collected another 3 points in their 2016/17 Welsh Alliance Reserves Division title quest.

On a damp and drizzly evening on the 3G at the Bangor University Stadium, the Citizens went into the interval 1-0 ahead but had to be patient in their approach as the second half went on. The second goal eventually arrived in the closing quarter as Guto Williams rounded off a fine move by City before Evans made sure of the points with a close range finish in the closing minutes.

The win extends the Citizens lead at the top-of-the-table to 12 points over nearest rivals Denbigh Town Reserves. The Denbighshire outfit have two games to play over the Easter weekend at Llanrwst and Llangefni on Saturday and Monday respectively, before The Citizens travel to Llanrwst themselves on Tuesday evening, 18 April (6:30pm Kick Off).