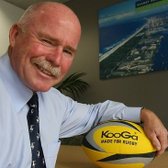 The Barbarians are ecstatic to be able to confirm All Black legend Grant Batty as the special guest for this weekends presentation night.

Please head to https://www.trybooking.com/Booking/BookingEventSummary.aspx?eid=227518 to secure your tickets.

Grant Batty, All Black #715
Article from the www.allblacks.com

Wellington rugby crowds loved Grant Batty for physically, with the possible exception of Kevin 'Jockey' Southee when he played at halfback for Marist St-Pats, he was at 5'5" (1.65m) and 11 stone (70kg) invariably the smallest man on the field.

Batty may have been small but this exciting runner had a monstrous, belligerent heart on a rugby paddock. Batty would be the first to admit his outstanding rugby career in the early 1970's was enhanced by three MSP men, New Zealand Rugby Football Union councillor Ivan Vodanovich, Wellington coach Frank Ryan and MSP coach Brian Coulter.

In the background too was another influential club member, the godfather of New Zealand rugby, NZRFU chairman Jack Sullivan, whose son John was MSP vice-captain and flyhalf in the early years of the club.

Batty decided to move to a warmer climate at the end of the 1975 season. He decided, after discussing the move with his workmate and Wellington provincial rugby colleague Robert Gray, to move to Tauranga to take up the position of PSIS manager there. Gray had been instrumental in obtaining clerical work for Batty with the PSIS in 1972 when it became obvious the latter might have some difficulty paying his bills during the 1972 New Zealand Juniors tour of Australia.

Batty, according to his All Black coach from 1974-76 J J Stewart, was a rugby playing freak.

Grant Batty, described in the 1971 Rugby Almanac as a 'small but lively player' made a dramatic entry into first class rugby in 1970 as a student at Teachers College and Victoria University in Wellington.

In his first year in the capital 'Batts' was selected out of the blue at centre for an All Black trial at Athletic Park in Wellington on May 23,1970.

In that trial the little man was concussed. This particular concussion probably prevented him from touring with Brian Lochore's All Blacks to South Africa in 1970.

Batty was born in Greytown in the Wairarapa on August 31, 1951. He was educated at St Mary's Convent School, Carterton and at Greytown Public School before going on to Kuranui College. There he played rugby at all stages and was a prodigious points scorer for the First XV in 1968 and 1969.

During the 1969 season as a member of the Kuranui College First XV he scored a remarkable 70 tries from the second five-eight and fullback positions, nine of them in one match against the Masterton Club.

Rugby Almanack editors Arthur Swan and Arthur Carman named Grant Batty as one of their five promising players of the year in their review of the 1970 season.

'Batty represented Wellington on seven occasions in 1970, played twice for New Zealand Universities and took part in the New Zealand Juniors trial,' Swan and Carman wrote. 'A real quick silver type with twinkling feet and an eye for the opening, Batty is still a good handling link in the back line; most of his appearances were at second five-eight or at centre.'

Batty for his part, at the beginning of the 1971 season when he realised he would never get a game at halfback for University where Rhys Barlow was the well-established incumbent, went looking for a new club.

Perhaps with memories fresh in his mind of the concussion he had received at the hands of Petone in his 1970 club outing for University, Batty turned up for pre-season training with Petone for one night.

However Robert Gray was working hard on 'Batts' in the background and one of the lures Robert used was the fact that the new MSP club would be coached by a former Wellington halfback Brian Coulter.

Batty was desperate to play halfback in those days but, in Coulter's view and in the view of Frank Ryan, it was an early-season experiment (backed by Ivan Vodanovich) which failed.

While the Batty halfback experiment was being conducted the former highly talented Marist halfback Gerald Arthurs began a solid playing career as a Poneke club player.

In time Batty was moved out wide again where Coulter and Ryan felt he belonged.

In 1971 he played at centre against the British Lions who hammered Batts, via a John Bevan elbow, and the province 47-9.

In those early days of his Wellington career everyone, including Canterbury fullback 'stiffarm' Fergie McCormick, it seemed was out to behead or maim the gifted young tyro. It is a credit to the little man that he survived these tumultuous blows.