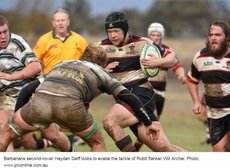 BARBARIANS broke their student curse and returned the favour to Robb College with a grinding 25-15 win at Alcatraz on Saturday.

The game ended up a home one for the Baa Baas after Bellevue Oval was closed on Saturday morning.

The 10-point win was a welcome change in fortunes for Baa Baas against the student sides and followed a 10-point loss to Robb in their first-round encounter.

“It was one we had to grind out,” assistant coach and returning second-rower Sam Piddington said.

“We ended up just dominating the second half.

“We dominated territory and kicked to the corners.

With the conditions and the slippery ground they just had to grind it out.

“It was close,” Piddington said.

“We knew we just had to stick to it.”

There was, as to be expected in the conditions, a fair few scrums.

Piddington said they did pretty well there, even snatching a couple of tight heads.

Fullback Sam Blatchford scored most of their points and had a big influence with his boot.

“He kicked to the corners and ran it at the right times.”

The front row – Robbie Barnett, Manutuke Tawhai and Aaron Mackay – were also very strong while captain Luke Heagney led from the front playing on the side.

“It was good to get a win,” Piddington said.

“That was three grades for us for the first time this season.”

The students were a bit frustrated about the game being moved.

They’d only had about 4mm overnight.

“It was a bit irritating with the weather and having to change the fields,” skipper and president Will Archer said.

He said the conditions didn’t really favour them.

“With the weather we weren’t able to play the game we usually play,” he said.

SATURDAY’S blustery conditions did little to deter the Barbarians as they triumphed over Robb College in the battle for outright second place on the ladder.

Both teams went into the match locked at 20 points apiece hot on the heels of competition leaders St Albert’s College.

A wet and muddy surface at Alcatraz saw the teams’ front men lay the platform for the match.

Barbarians’ assistant coach Gary Wallace said Robb threw everything they had at his side but was impressed with his team’s defensive efforts at holding them off the line.

“Both team defensively, I thought worked extremely well,” he said.

“We found Robb very hard to tackle with their hard running style.

“Our boys certainly defended very well in the wet conditions and the game was based solely around defensive efforts.

“We made some mistakes under the wet conditions and they certainly capitalised on it, which was a credit to them.”

Wallace highlighted Keith Ellis, Will Chambers, Rob Barnett and Sam Piddington as having outstanding performances in the 25 points to 15 win.

First grade’s victory topped off a great day out for the Barbarians with their second and third grade teams earning wins in their matches against Robb.

“The guys are certainly going to put pressure on the first grade team,” Wallace said.

“They are playing really well.

“The thirds are putting a lot of pressure on the seconds and they haven’t won that much but are starting to hit their straps.”

In the weekend’s other top grade match, St Albert’s headed north to take on Glen Innes.

The ladder leaders claimed victory with another impressive performance, trouncing the home side 87 points to nil.

The June long weekend will see all sides have the weekend off before rugby resumes on June 18.