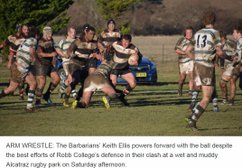 A LATE try to Robb College wasn’t enough for the students to overcome the Barbarians at a wet and muddy Alcatraz on Saturday.

The home side dominated the majority of the match off the back of a strong forward pack who rolled over Robb’s front men early.

Baa Baas’ coach Tom Bower said his side set out to dominate through the middle of the field and was pleased they were able to get over the top of their opposition.

“Because of the conditions, it was a really hard one in terms of fighting for possession,” he said.

“The way we approached the game was, we talked about it before the match and said we have to play to the conditions and because it was so wet and heavy, in our own half we just played to corners.

“We had Keith Ellis kicking into the opposition corners right down near our tryline and we just backed our defence to make sure that we kept them down there.

“For the majority of the game that really worked.

“We were just physical and dominant.” With only a month of regular season matches remaining before the finals series kicks off, Bower said now is the time for his side to put together some strong performances to put themselves in contention for the title.

“We are putting some good performances together but not a full 80 minute match,” he said.

“It is a bit exciting from the coach’s point of view that we haven’t seen our team put a full 80 minute game out there. “This weekend coming against the Blues is a big one for us as well and a big one for them because everyone is fighting for the top two spots.

“We know we have to win this one to really try and cement that second spot.”

In this weekend’s matches, the Barbarians tackle the Blues at Moran Oval and Robb College take on the Glen Innes Elks in their match at home.