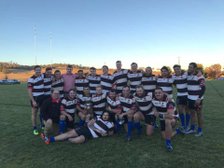 The Barbarians beat Glen Innes-Guyra in Sunday's minor semi-final to qualify for this Saturday's preliminary final, where they will face Robb College for the right to take on St Alberts in the grand final.

Glen Innes-Guyra managed to put a team together to take on the Barbarians in the New England Rugby minor semi-final on Sunday but it was last year’s grand finalists who had too much strength for the combined towns team.

The Baa Baas continued their red-hot end of season form against the GhostStags to land a spot in this Saturday’s do-or-die semi-final encounter against Robb College.

Barbarians coach Gary Wallace said the whole side banded together and stepped up for the 34-10 win.

“We started off on a hard note because I had to discipline three players for arriving late,” he said.

“Three of our key boys weren't allowed to start the game.

“The guys that went on did an almighty job as a team.”

He put the win down to his side’s ability to keep their opponents out.

“We defended very well, our one-on-one defence was really solid.

“Our enthusiasm to want to get to the next week.

“We just tried to keep them level headed and our senior players who experienced last year played a really important role in that.

“Our players just played to what they wanted to achieve and that was the saving grace.”

The Baa Baas were the favourites heading into Sunday’s game but will be the underdogs against Robb College in Saturday’s grand final qualifier.

Wallace said his side have to be up for the task of matching it with a “well-drilled” and “big” students outfit.

“It is hard to describe them because they're good across the board I believe,” he said.

“I don't think the score against Albies reflects what they can do.

“Robb have done a fantastic job this year and they are not out of it.

“We haven't beaten them yet so they have the upper hand on us.

“We have to step up to the mark as a team to prove we can beat them.”

While Wallace believes Robb to be strong all over the paddock, he has his sights set on a couple of key players who could break the game open.

“Robb's two centres are excellent too so we will be targeting those two guys,” he said.

“We are just going to focus on blocking out their two centres.”

In a boost for the Barbarians in the lead up to the match, Wallace has called upon former All Blacks winger Grant Batty to give the team advice for the showdown.

Robb were in Saturday’s major semi-final outgunned by college rivals and reigning premier St Alberts 43-10 after trailing by 14 at half-time.