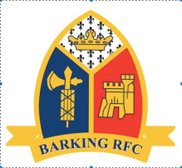 Following the news in relation to East Grinstead RFC, Barking can confirm that they will remain in London 1 North for the 2016/17 season.

Following the news in relation to East Grinstead RFC, Barking can confirm that they will remain in London 1 North for the 2016/17 season.

Following the news this week that former British and Irish Lion and England international Ollie Smith will take over as Head Coach next season, Barking have been handed another boost, with the news that the club will avoid relegation and begin the 2016/17 season in London 1 North.

Due to financial difficulties, East Grinstead RFC have been forced to remove themselves from National League 3 and will re-enter the leagues in the Sussex Intermediate League. This move reverberates through the leagues, with Barking one of the beneficiaries, as they retain their London 1 North status.

“It’s obviously great news for everyone involved in the club that we will be in London 1 North next season. The squad fought very hard throughout the latter stages of the season when relegation looked to be on the cards, and this is an unexpected reward for that effort.

“However, we’re under no illusions about the challenge ahead. By rights, we should have been relegated last season, and other sides in the league will expect us to be in the same position next year.

“We will have to be a lot better than we were last season and it’s a challenge I’m looking forward to. We have a good core of players at the club, who we will be looking to add to, and our target is improvement.”