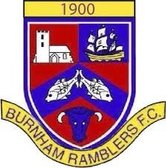 Defeat At Home To Burnham

Barkingside fell to a 3-0 defeat at home to Burnham Ramblers on Monday night at Cricklefields.

Both teams met last in the reverse fixture at Leslie Fields, which Burnham won 3-2 on Saturday 26th March, so 'Side were looking to bounce back from that result.

After a decent opening by both teams to the game, Burnham went ahead on 34 minutes through Haziz Kone's well placed strike.

'Side with the defeat remain in 9th place in the table. Steven Le Sage's men are back in action on Saturday 9th April when they host Wivenhoe Town at Cricklefields. Kick-off for that match is at 3pm.