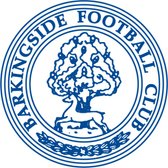 Barkingside fell to a 3-0 league loss at home to Wormley Rovers last night, on a night overshadowed by the passing of John Belsey.

John sadly passed away in his sleep on Sunday and had been involved with the club since the 2008/2009 season, covering a number of roles - including assistant secretary and turnstile operator - in that time.

He was well known to many fans and staff and was respected by many clubs and league officials down the yearrs too, as a friendly and welcoming face of the club.

The club did hold a minutes silence last night ahead of the game in respect of John, but will be staging a further tribute to John at one of the home games in October.

Wormley went ahead on 12 minutes through a Louis Offer penalty before Cav Clarke doubled the lead on 34 minutes. A third for the visitors on 62 minutes sealed the win for Wormley who now sit top of the table, leaving 'Side in 10th place.

The Sky Blues return to action on Saturday 18th September when they face Harwich & Parkeston away in the league. Kick-off for that match is at 3pm.

Everyone involved with the club send their condolences to the Belsey family and their and John's friends in this difficult time.