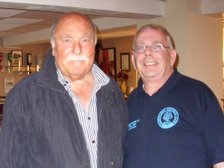 Barkingside were saddened to learn of the passing of former England great Jimmy Greaves yesterday, who played for the club in the 1950's.

Jimmy Greaves MBE was a national icon, and passed away at the age of 81 early yesterday morning.

He played for 'Side around 1952 under our great manager and club stalwart Sid Shaw, before going on to become one of England's greatest ever players.

He holds the record for most goals in the English top flight with 357, and scored 266 in 379 matches for Tottenham.

Greaves scored 132 goals in 169 matches for Chelsea between 1957 and 1961 before moving to AC Milan. He scored 9 goals during a brief stay there before returning to England to play for Spurs.

He scored 44 goals in 57 games for England and was a member of the 1966 World Cup-winning squad, starting in the three group games before pucking up an injury - which saw him lose his place in the side to Geoff Hurst for the knock-out stages.

After leaving Spurs in 1970, he had a spell with West Ham before retiring at the age of 31 in 1971. He would return to football at non-league level with spells at Brentwood, Chelmsford, Barnet and Woodford Town.

He was widely respected across the world and was a popular broadcaster and pundit, forming one half of the popular 'Saint and Greavsie' show on ITV with Liverpool and Scotland player Ian St John.

Jimmy was a great lover of the game and the club were delighted to have him in attendance back at our Essex Senior League match with Witham Town in April 2010. The photo of him taken that night, with our match-day steward Martin Meyers in the Oakside clubhouse, was just one of many taken that night with fans.

Everyone connected with the club would like to pass on their condolences to Jimmy's friends and family at this difficult time.