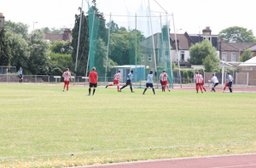 Side Hit Eight Past Halstead

The scoring began early at Cricklefield Stadium with Carvell grabbing the opener. Dan Jones then tapped into an empty net barely 30 seconds later, after an initial effort had been saved.

Halstead Town who were only confirmed as ‘Side’s opponents less than 48 hours before kick-off never got into the game. It was 3-0 before the half hour mark after Calvin Poku took advantage of a loose ball, getting there before the on rushing keeper to finish.

Steve Carvell could have made it four soon after but his strike struck the upright, the No.9 was then foiled by the Halstead who saved well with his legs.

Carvell did get his second on 32 minutes, using his head to nod home from a corner. He then saved the best until last, lobbing the keeper from 35 yards to complete his hat trick on the stroke of half time.

Already five goals to the good, manager Matt Frew made changes. Substitute John Bricknell poked just wide with the goal at his mercy on 55 minutes and then minutes later, the former Enfield man was twisting and turning in and out of the Humbugs defence but was unable to finish.

Bricknell did get his name on the score-sheet slotting home on 67 minutes his new side’s sixth goal of a very one sided clash.

Another new boy Stefano Georgiou will have delighted his manager with a brace of goals to round off the scoring; the first a skillful finish made it 7-0 before a magnificent strike from 25 yards out went in off the post.

Halstead’s first and only effort on goal came five minutes from time, highlighting just how in control ‘Side were at their new home.

“I’d have liked tougher opposition but you have to beat what’s in front of you. What you put into the game is what you get out of it and the main thing was to get match fitness from this game and to make sure we are ready for the [start of the season] August 9th.”