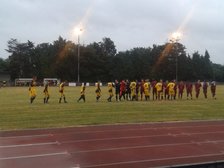 Barkingside fell to a 5-1 defeat at home to Brentwood in their final pre-season friendly of the season.

The Blues started the game better, having some early chances, hitting the woodwork and having an effort cleared off the line by the 'Side defence in the first 10 minutes.

Barkingside came into the game a little bit more and opened the scoring when a 'Side long ball was misjudged by the visiting goalkeeper and striker Luke With made no mistake with the finish, beating the Blues defenders to the ball.

'Side had a chance to increase their lead, but the curled effort sailed wide. This seemed to galvanise the Blues who really got into another gear and scored two goals in two minutes as they looked to take control.

In this phase of play, the Blues started to show their passing game & their pace going forward, though 'Side nearly caught the visiting goalkeeper napping again just before half-time with a looping shot though the Blues 'keeper recovered & made the save.

The second half began with the Blues clearly on the front foot and also retaining possession better in sapping conditions for both sides, making 'Side work even harder.

'Side had a few chances to level in the second half and credit has to go to them for keeping going but as we got deeper into the half it was clear that the Blues were "on it" and after a couple of missed chances, including a decent save by the 'Side 'keeper, they got their reward for their persistence with another quick-fire double. First, they scored from close range & then piled in with another after initially hitting the bar, scoring with the follow-up effort.

After missing another couple of chances, Blues showed their second half dominance by adding another goal three minutes before the end, their forward blasting home from close range.