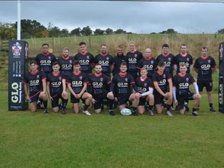 Buoyant Barney bounce back in style

Barney haven’t got off to the best of starts this season with an opening-day victory over Sedgefield so far their only success. In recent weeks, however, there were promising signs, despite some fairly heavy defeats and hopes were high that the young side could win again against a seemingly inconsistent Winlaton.

Barney began with intent and skipper Greg Upton led the way as he put in a thunderous hit on his opposite number. The bulk of the first half, however, was quite a scrappy affair, not helped by a blustery wind that made handling tricky.

There was no score as half time approached, but Castle took advantage of a Winlaton spillage and Luke Cowley kicked through with Archie Thompson following up to secure the try. The conversion by James Barber saw Barney take a 7-0 lead. Almost immediately Henry Thompson broke through in style to bag the second try and a 12-0 half-time lead.

At the start of the second half Winlaton kicked an early penalty, 12-3, but an increasingly confident Castle cut loose and stamped their authority on the game. The first try of the second half again came from a Winlaton error with Archie Thompson kicking through and impressive full-back Danny Winter securing the try to extend the lead to 17-3.

The four try bonus point was then delivered by rampaging front row forward Marty Lonsdale who stormed-in from 30 yards out and celebrated the score with a swan dive and an Alan Shearer style salute. He nearly bagged his second a few minutes later when he hacked through following a Winlaton handling error, but young fly-half, Ralph Makepeace won the race to score the try. With conversions from the ever-reliable boot of Barber, Castle had extended their lead to 31-3.

From the kick-off Lewis Whigham took the ball and rocketed up the pitch towards the try-line. His spectacular burst of speed was beginning to wane when Doug Shaw appeared on his shoulder to take the ball on and score a terrific front-row try, with the conversion taking the score to 38-3.

By now Castle were clearly enjoying themselves and confidence was high and Luke Cowley scored a beautiful try, rounding the Winlaton full-back to score under the posts. There was time for a late cameo appearance by replacement Robbie Lavin, who showed his pace by running in an impressive try from the halfway line and then rounding things off by running on to his own kick-chase to complete the impressive 59-3 victory.

This was a terrific performance from improving Barney and there were a number of ‘man of the match’ contenders, with Winlaton nominating Matt Morrison for his all-action back-row display.

The club would like to thank the Bell and Worley families for their generous sponsorship of the game. Next week there is no league game and Castle have a week off before travelling to Ryton the following week, where they will be hoping to build on this encouraging performance.