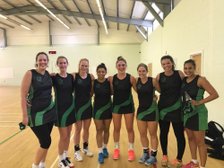 We will get them next time ladies!

Saturday we faced Fairlands at home. With a good training match in the week, we were ready and raring to go with only a point between us in the table.
Unfortunately, things were against us from the off with both Becky and pippa coming down with a sick bug the night before the big game (what are the chances?!) and leaving us with limited Defence. Katie stepped up from the b team and played two games, bless her but we were all a bit thrown and wanted to give ourselves the best start in the game.

We started well but made a few more errors than we would have liked, thrown by a couple of odd umpiring calls, we came off 12-8 down and re-focussed our minds as we had agreed we would let it go. Their aim was to try and make us hyped up and we knew it was their tactic from the off, so we re settled and took the court once again for the second quarter. We had an epic 2nd quarter and drew the scores back to go into half time 22-21 down with our centre pass coming into the 3rd quarter.

With a shift around in mid court in positions people are capable of playing, we assumed we would go on court and carry on the strong play, but it soon became clear that the change was not working and we made quite a few errors back to back , allowing them to take the lead away. With a time out called from Megan, Debbie came onto court to try and claw it back but the damage was done. With 30 seconds to go, i rolled my ankle and had to come off. Gutted as i was playing quite well and enjoying the game.

we looked despondent in the last quarter and heads went down, losing the game by 11 overall. 46-35
Unlucky girls - we know now what works and what doesn't and after xmas we will come out firing in these games, i have no doubt that we can beat anyone if we put our minds to it and have our strongest team out. Overall, it wasn't a bad performance for a limited team but we know we are capable of better and we cannot afford quarters where we lose it 13-5 and expect to come back into the game.

We will re group i'm sure - onwards and upwards!