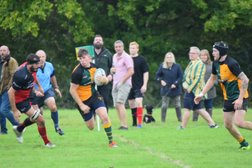 Barns Green secure their first win by only 2 points in a tough physical game.

The first 20 minutes went by scoreless as both teams wrestled for a foothold in the game. Strong defenses coupled with unforced errors meant that neither team could break the deadlock however it was Haywards Heath that went over first. After being camped in their own 22 for long periods, Barns Green were unable to exit well enough. Haywards Heath capitalised on this when a well-disciplined catch and drive pushed them over the line for the first score of the game.

The game continued to be an arm wrestle in the middle of the park with both teams being hounded by errors. Frustration started to set in on both teams however the referee managed to keep the game flowing and fair.

Shortly before half time, Barns Green took their first points of the game. As the scales of pressure started to tip in the Green and Gold's favor. A well-placed kick had the Haywards Heath defense scrambling to get back. Barns Green managed to turn the ball over quickly and after a few phases, Jarod Van Blerk broke three tackles to power over the line giving Barns Green the lead 7 – 5 going into half time.

The second half started much the same as the first. Haywards Heath put Barns Green under huge amounts of pressure early on and kept them pinned in their 22 unable to exit. It was only a matter of time before Haywards Heath would add another try to their tally. After several phases and last-ditch tackles, Haywards Heath broke through between the posts to put them back into the lead.

Barns Green had to react and regain composure and it wasn’t long until they did. The Barns Green forwards started to dominate the collision and soon had Haywards Heath’s scrum walking backward. This pressure turned into points for Barns Green as a poor clearance kick from Haywards Heath fell just outside of their 22. Jarod Van Blerk collected the ball and ran back at the advancing line. The ball was quickly recycled to the backs the ball quickly founds its way to Charlie Adams who only had to take one step to touch down over the line.

Some errors on both sides kept this game tight right down to the final whistle. Mistakes and miscommunication nearly lead to Barns Green throwing the game away but thir defensive composure ensured they secured their first win of the season 14 - 12.