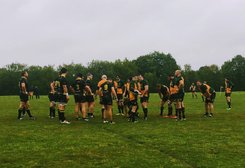 October brought about the first home game for BG as they also entertained their VP's. The Indian summer we have had this season was replaced with a wet, damp windy day that would make running rugby difficult.

After the game was delayed by 45 minutes due to a delayed flight, the visitors kicked off down the hill with the elements at their back in the first half. They were into their stride quicker than the hosts, their ten kicking the corners and their defence pressing with some good line speed as BG struggled to exit their half.

St Jacques put the first points of the game on the board with a penalty in front of the sticks and soon followed up when their bulky number 8 brushed aside the hosts to take the visitors into an early 8 point lead.

If you were watching from the side line then you wouldn't be criticised if you thought that the flood gates would open. To their credit the hosts held out the visitors for the remainder of the half. The game itself was largely played in between the twenty twos, worsening conditions made handling difficult and the lineout a lottery for both.

BG although not threatening the hosts line were beginning to gain a foothold in the game, strong carries from talisman Watkinson ably supported by Brown and Taylor meant that the visitors had to put in their fair share of tackles.

Although the rest of the half was a fairly torrid affair in terms of a spectacle, BG would have been the happier of the twos sides going into the break.

BG spoke about gaining the first score of the second half to carry on what they felt was a change of momentum going into the break. It was clear the visitors would have to adjust their game plan in the second half by keeping it tight.

Barns Green kicked off and the change of tactic was soon evident from the visitors. As expected they moved to a more direct game plan, one that they executed remarkably well in poor conditions.

St Jacques went through multi phases through strong forward carries and were quickly rewarded with an unconverted try to take a well deserved 13 point lead.

Barns Green seemed to be defending continuously for the first quarter of the second half, despite putting in some great hits the visiting machine seemed to be relentless in its quest to truck up the hill. With Sprigge leading the defensive effort from ten and Bouet and Wilson also shining in defence it showed the character of the hosts to only concede one converted penalty for the remainder of the onslaught on their line.

Barns Green now 16 points adrift needed to find some territory and possession to put the hosts under pressure.

Taylor and Conway were exerting massive pressure on their opposite numbers at scrum time, this enabled the hosts to work some field position where Hoyte was able to add two quick penalties to bring the score back to 16-6 with just over 15 minutes on the clock.

Perhaps the turning point of the game came after the hosts had worked a rare overlap down the right flank, with open field ahead a score by the hosts might have made the conclusion of the game interesting.

Unfortunately St Jacques found a further gear to finish, scoring again through some slick interplay between their forwards and backs to take the game beyond the BG with 5 minutes of the game to go.

As the game entered its last play the visitors were able to cross for a further converted try. The impressive visiting number 4 brushing aside some tired Barns Green tackling for a deserved score.

Simon Flint blew the final whistle shortly to end our unbeaten start to the season.

The visitors were good value for their 28-6 win and produced a second half performance, in poor conditions, that surpassed anything Barns Green faced in Sussex one last year.

Barns Green can take a number of positives from the game and now know what they need to do to close the gap when the sides meet again in December.