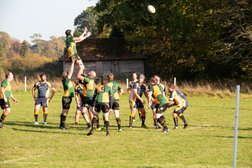 Barns Green win their fourth league game out of five.

Barns Green headed on the road again to meet old foes Midhurst. With the hosts unbeaten this season and BG with only one defeat, a close game was anticipated.

With overheads as good as you will see them in October, so good some of the BG faithful arrived by helicopter, an expansive high octane game was on the cards. Both sides would not disappoint as they both produced a classic that was only settled in the final minutes of the game.

The visitors started the brighter, a period of sustained pressure in the hosts red zone saw them infringe and allow Matt Hoyte to add the first 3 points of the game for BG.

As the early exchanges were played out, it was clear BG had the superior scrum and the hosts had an exciting back line that were playing with width at every opportunity.

Midhurst opened their account with a well executed try, they producing quick ball on numerous occasions for their ball carrying back row to punch large holes in the visitors defence. Their number 8 was particularly impressive and dominate in the carry and he was instrumental in giving the hosts a 7-3 advantage.

If the first half try was well worked the visitors only had themselves to blame for the second. BG were awarded a penalty in their own twenty two and were perhaps a touch naive looking to attack from such depth. Midhurst were able to produce a turnover and their out side centre cantered in unchallenged to give the hosts a 11 point advantage after the first quarter.

BG Captain Thomas Bouet ably supported by ‘Rhino' Watkinson were able to execute a number turnovers for the visitors which kept the hosts from adding to their first half score.

As the first half came to its conclusion the Green were able to add a further Hoyte penalty after Midhurst were caught offside after a strong Mike Mann carry from a shortened lineout.

Neil Bailey addressed his side at the break, making suggestions how to nullify the home attack whilst instructing his troops how to improve theirs.

BG suitably refreshed after the half time oranges, were able to land their first blow of the second half. A scrum feed from 15 out was won, Matt Taylor, Harry Davies and Danny Conway turned the screw which enabled Mike Mann to propel his way off the base to add an unconverted try for the Green.

Having worked their way back into the game, BG were caught sleeping at the restart. A strong kick chase saw the visitors pinged for holding on and Midhurst popped over the penalty to again restore their 6 point lead.

It didn't take Midhurst long to return the favour, Matt Hoyte again successful with a penalty after the hosts failed to roll away from the tackle.

With 20 minutes to go the game was evenly poised and both sides believed they could come away with victory.

With the hosts on the front foot again a fracas occurred after the line out which resulted in a player from each side having a ten minute breather.

Midhurst pressed and looked to land what would perhaps be a telling blow, with strong carries they worked an overlap, a BG player was unsuccessful in an attempted intercept which resulted in a further yellow card for the visitors.

Midhurst were now facing 13 but opted for the 3 points, perhaps ignoring the opportunity to gain more due to their set piece being under such severe pressure

This scenario saw the Green go to a power game in search of a try, Matt Sprigge pumped his side into the corner after the pack had earned another scrum penalty at the coal face.

Ross Young won the line out and skipper Tom Bouet powered round the front of the lineout, the ball was worked back to Danny Conway who bundled his way over wide right to bring the visitors back to within one point.

With not long left on the clock Midhurst rushed the restart, as the ball didn't go the required ten they found themselves conceding a scrum on halfway. By this point both sides had made changes and BG replacement Mike Leech added his fresh legs to another dominant scrum which again the hosts were penalised from.

BG worked their way upfield again and after a strong drive at the lineout found themselves in the visiting 22. Second row Mark Brown carried around the corner from the resulting ruck, he attracting a number of defenders. Chris Bailey then spotted the on rushing Matt Sprigge with a cut out pass that enabled him to brush off an attempted tackle to score again in the far right hand corner.

As the conversion was missed, and the score now 6 points in the visitors favour, Midhurst had one final roll of the dice in which to get something from the game.

BG held firm and the final whistle was greeted with relief from the visitors.
Both sides had produced an end to end pulsating affair in a game that could have been won by either side.

Coach Neil Bailey was quoted at the final whistle as saying he was super proud of his charges efforts. What must please him most is coming out the right end of these tight affairs despite not yet firing on all cylinders.