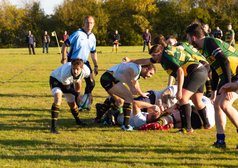 BG completed the league double over Shoreham in an entertaining match that finished 31-10 in favour of the hosts.

The hosts were out of the blocks the quickest, attacking down the slope they worked through multiple phases with the returning Adams's and Rice at the fore. Conway followed up with a lung-busting burst into the visiting twenty-two before Rhino Watkinson received an offload to plunge over under the posts for the first score of the day.

It wasn't for another 30 minutes before the game would see its next score, both sides canceling each other out as they both struggled to put sustained periods of pressure together.

Shoreham had the ascendancy in the scrum and was causing the hosts a number of problems, BG controlled the lineout with Brewster and Bouet particularly influential. It was from a lineout the BG drove into the host's red zone, such as the speed of the resulting maul a try looked inevitable. Conway spotted some space on the far left, he linking with scrum-half bailey who crossed the line for what would be the first of his brace.

Hoyte landed a superb touchline effort and although BG finished the half defending their line they probably were good for their 14-0 halftime lead.

Barns Green opened up the second half much the way they did the first, strong carries by Brown and Mann lead to the impressive Brewster finding himself in open field after running a great support line, he cantering to the try line to give BG a 21 point cushion.

Shoreham shuffled their pack at this point and brought on some fresh legs, this galvanising their lumpy runners into action. After a number of scrum penalties, they worked their way into BG territory and were rewarded with a score as their 12 cut back against the grain to give them their first 5 points of the game.

The hosts added their fourth and final try in what was to be a virtual carbon copy of the second, Conway again bursting from the back of a driving lineout, agonising for him he was hauled just short but not before popping the ball to the ever-present bailey to dot down his second.

With some 20 minutes left on the clock, the hosts really should have gone through the gears and added to their try count. Shoreham to their credit enjoyed their best spell of the game as they added a further score and made the hosts defend for long periods.

In the resulting period, the hosts were reduced to 14, the official unhappy with the number of indiscretions conceded by BG in a short period of time.

As the game drew to its conclusion an Adams turnover enabled Hoyte to add a further 3 to put the game beyond doubt.

Coach Neil Bailey said, "Although we haven't performed to the best of our ability to date, the belief is there and our game is starting to come together as we head towards the final stages of this initial league".