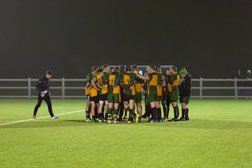 Barns Green Shine Under the Lights

An entertaining local derby was played out under the lights as both clubs took the unusual approach of a Friday evening game. The game was held on the RFU 4G pitch at Horsham, this facility seeing a large number of spectators in attendance.

The significance of the game was amplified as this league game was a doubleheader and as such double league points were at stake.

Barns Green opened the brighter but both sides were perhaps guilty of being a bit too frantic in the early exchanges. As the game settled it was clear that BG had scrum dominance and it was from a five-metre scrum that former Holbrook player Thomas Bouet produced the first score of the game to give BG a 5-0 advantage.

At the restart BG were caught out by a sublime piece of opportunistic work from Holbrook wing Adam Davies. He claiming the ball at full tilt before showing a clean pair of heals to the BG cover to arrow in for a superb solo score.

After 20 minutes the game was locked at 5-5 with the Holbrook camp probably more pleased with the opening quarter than their counterparts.

As the second quarter progressed BG started to exert more pressure on Holbrook. Strong carries from Ross Young & Tom
Viney gave some quick ball which enabled the green to work George Wilson into space for him to cross for another unconverted try.

Holbrook were defending with great tenacity, this combined with the referees over zealous whistle meant that green struggled to put sustained periods of continuity together.

With the clock running down towards half-time BG was able to add a further try which gave them a ten point halftime cushion. The ball was released to Conor Anderson who expertly picked a pass from his boot laces before drawing the last defender to put Adam Rice into the corner.

Barns Green spoke about providing their half-backs a better platform at the break, they feeling this the key to unlock the Holbrook defence. Coach Bailey also spoke about his side addressing the number of penalties they had given away in the first period.

After addressing the previous issue at the restart BG claimed the ball at the start of the second half and soon found themselves in opposition territory. BG threatened the Holbrook line on a number of occasions but were kept out by some great scrambled defence, they eventually settling for a Hoyte penalty to push their lead out to thirteen points.

Holbrook and Barns Green both added fresh legs from the bench at this point. For BArns Green the returning Sam Callaghan made an immediate impact he finishing off a try created by strong carries from his fellow pack members Mann, Taylor and Young.

If the floodgates were to open at this point then Holbrook could be forgiven such was the amount of defensive work they had put in. As it was Holbrook had their best attacking spell of the second half which saw the green reduced to fourteen and their line coming under continued pressure. Fortunately for the green their line integrity remained firm and they won a penalty and subsequently cleared their lines.

In Matt Hoyte the Green have the luxury of a balanced and extremely gifted runner. In what is becoming a trademark he made a blistering midfield break leaving a number of defenders in his wake. Although dragged down in the opposition twenty two he found Taylor in support who continued the move. A further 3 phases were worked through the pack before the ball was released out to the wider channels where the imperious Taylor carried a number of players over the line to add the 5th of greens try's.

With both sides beginning to tire, space and the opportunity to exploit this were becoming more frequent. It didn't take long for Matt Sprigge to find a few soft shoulders in centre field, as he broke through for a score in which he also converted to give the green an unassailable lead.

Barns Green finished the game again pressing the Holbrook line, however they were unable to add to their score as Holbrook displayed a great attitude to defend their line with such vigour given the game was lost some twenty minutes earlier.

In winning BG moved up to second in the league and laid the foundations for what will be a testing end to 2018 as they travel to unbeaten st Jacques and entertain 3rd place Midhurst on consecutive weekends in December.