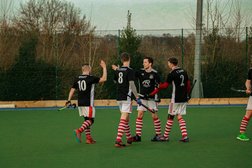 Barnsley put some daylight between them and Leeds Adel after a convincing win.

Over the past few weeks Leeds Adel have been one of the stand out teams in terms of their results, especially holding Doncaster Independent to a two all draw. But Barnsley were also confident going into the game after some great results. In the reverse fixture Barnsley ran out 5-1 winners with another convincing display. In the Reds last game, they scored an incredibly quick goal just inside one minute and on the back of the success of this did one better. The ball was played back to Robert McCarthy from Dave Wright at the push back, McCarthy waited for Wright to make his run forward and then hit the ball towards Wright who’s little dummy found a defenders foot but the Reds players played with Connor Massey picking the ball up on the left and went towards goal, his shot was saved but the ball popped out and went to Louis Raine and with his first touch of the game he put it in the net. Time on the clock was 38 seconds! Leeds tried to hit back straight away from their pushback, the ball was lifted into the Barnsley D but James Shaw in the Barnsley goal read the situation and chested the ball down and kicked it clear. Barnsley were in the ascendency however, and it was nonstop pressure on the Leeds Adel goal. It wasn’t long after the first goal when Raine had the ball in the net again but the umpire ruled the goal out adjudicating that the ball had kit Wright on the back before it went in the goal. So the score stayed at 0-1. With all the pressure that Barnsley were pilling on the Leeds defence it was only a matter of time before Barnsley would have their second. This time after a Leeds defender committed a foul in the D, Barnsley were awarded a short corner. With a regular injector Kieran Ryan sitting in defence Raine injected the corner. As he injected the ball in went slightly wide of the top and Chris Dare picked the ball up, he then passed the ball across the D to Wright and it eventually ended up with Raine at the back post and he tapped it in the goal, past the diving keeper. Leeds tried to get back into the game and when they had a short corner, Ian Massey was sent to the halfway life for running too early, J. Shaw was forced into a save, and with a big boot cleared the ball away from danger. J. Shaw had to make a couple of clearances but was able to do so with ease. The Barnsley back line were in confident mood and were playing the ball around nice. This created more space for the forwards and opened up the Leeds defence. Despite the number of chances the Reds were creating they couldn’t convert any more of them and at half time it was only 0-2.
In the second half Leeds were adding more and more pressure, stopping Barnsley playing the ball around quite so easy and forcing some mistakes. Leeds seemed to have been awarded a series of short corners for minor infringements that would normally go unpunished. The Barnsley defenders stood strong and managed to clear all the shots from the shorts. After this pressure from Leeds Barnsley kept hitting them on the counter through the pace of C. Massey and Raine. The Leeds players couldn’t handle the pace and trickery that Raine had and this ultimately lead to Barnsley adding another. Raine danced his way into the Leeds D and found Bryce Tuckett in the middle of the area and made no mistake in dispatching the chance to give Barnsley the 3rd they needed and deserved. Leeds didn’t lay down though and kept up the pressure. A foul on the edge of the Barnsley D was taken quickly, a little bit too quick for the Barnsley players to retreat and instinctively Ian Massey encroached too early and the umpire then awarded a short corner. Leeds scored their subsequent short corner to pull the score back to 1-3. Leeds then pilled on the pressure with attack after attack, but Barnsley held on and hit Leeds again with a counter attack. Barnsley spread the ball across the field and it ended up with John Hunt on the right, he then passed the ball to Raine with a nice one two and eliminated a couple of the Leeds players. McCarthy then took over and with pinpoint accuracy found C. Massey who was in the right place to deflect the ball past the Leeds keeper. With only minutes left Barnsley kept hold of the ball to see out a convincing win. Now the gap between the two sides is four points and Adel have played two more games. Man of the match was awarded to Louis Raine who ran the Leeds players ragged throughout the game, well minus the two minutes he was off the pitch after his green card for chatting back to the umpire.
Next week Barnsley host table toppers Doncaster Independent which is set to be a highly interesting and heated contest.
Share via
FacebookTwitter
https://www.pitchero.com/clubs
Recent news