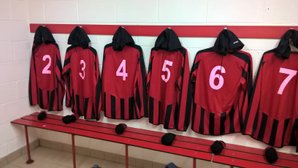 Great week for the Riversiders .

Both First team and Reserves set out their intent for the season ahead this week , picking up points to surge up their respective league tables.

Last Saturday ( 25/08/17) A Ben law penalty ensured a point at home against high flying Teversal,
Barrow then went to Holwell Sports on bank holiday monday, securing a 4-2 win , Barrow went 2-0 up but a resolute Sports levelled the score midway through the second half , this sprang the Riversiders back to life allowing Barrow to take all three points with a brace of goals in the final twenty minutes.
Saturday (02/09/17) Aylestone Park came to Riverside Park , Barrow made it seven league points from a possible nine by posting a great 3-0 win , goals from Sam Beaver , Enduoma Chilaka and Zac Ginvert ensured the visiting Park went home empty handed.
Manager East was in a buoyant mood after the Latest Aylestone Park victory, "the squad is stronger and we are gradually getting their in terms of shape and how me and the rest of the management staff want us to set up and play , if this bunch of players stick together then we can really have a big say at the right end of the table, there is obviously a lot of hard work to do but we are happy in the progress made so far ".
Back to back wins for the reserves and plenty of goals to boot was the order of the week for the Riverside Park second string .
On Tuesday evening a fine 5-2 home win over Holwell Sports development squad ensured a two day Double for the Riversiders over there local rivals .
This was followed up on Saturday by Giving Earl Shilton Albion an 8-2 thrashing in there own back yard.
Managers Nick Green and Andy Geary finally getting the reserves going and pushing up the table just off the all important promotion places.
Next up for the Riversiders is a trip up the M1 to face Kimberley Miners Welfare in the first round of this years FA Vase.
The Resrves are in league action at home to St Andrews Reserves.
Both teams looking to make it three wins out of three .
Share via
FacebookTwitter
https://www.pitchero.com/clubs
Recent news