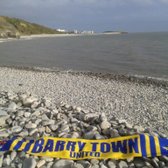 Barry is South Wales' most populated town; its 55,000 inhabitants putting it behind only Wrexham, Newport, Swansea and Cardiff in population.

A hilly, seaside dwelling under seven miles from the capital, Barry's coastline peers towards the English resorts of Weston and Burnham-on-Sea and is home to several picturesque beaches and cliff landscapes.

The Barry community itself is somewhat diverse in background; a reflection of the town's rapid growth as the nineteenth century bled into the twentieth.

To that extent, the emergence of Barry as one of the country's most populated areas was intertwined with its transformation into the world's largest port for the export of coal.

With skilled workers coming from far and wide to service the new Barry Docks, Barry's population expanded significantly from the 1880s onwards.

It is therefore of little coincidence that this period ushered in glimmers of what would become Barry's representative football team.

In addition, the 1880s also saw the isolated Barry Island become connected to the growing town itself; a move that would later facilitate the rise in popularity of Barry as a holiday destination.

The creation of the Barry Island holiday camp at the height of the swinging sixties kick-started a 30-year era that changed the town's public image from international trade hub to affordable leisure resort.

Then, in the mid-1990s, Barry's football took centre stage; with unprecedented success on the field at home, away and abroad ensuring the town's name remained in the public consciousness.

The new century meanwhile saw Barry showcased to a national audience in a new manner; the town providing the setting and backdrop for the wildly-popular BBC sitcom 'Gavin and Stacey'.

Barry today, like so many of its type, has struggled through times of recession, losing a number of cherished amenities along the way.

However, the town retains significant natural beauty, with its green country parks delighting visitors and its historic Norman castle among a host of hidden gems to explore.

Barry is accessible via junction 33 of the M4 and is home to four railway stations (Barry, Barry Docks, Cadoxton and Barry Island), while standing mere minutes from nearby Cardiff Airport.