As a fan-owned football club, Barry Town United are proud to have a colourful, vocal and active fanbase, who are loyal to the core.

Our supporters span a wide range of ages and backgrounds and have stuck with the club through the most difficult of circumstances; to their eternal credit.

We are proud that this fanbase also adheres to a self-imposed family-friendly code of conduct; meaning visitors to Jenner Park can bring their children without the fear of prevalent bad language or hostility.

Instead, spectators are more likely to hear an eclectic collection of chants and songs, drawing inspiration from the most diverse of sources; from KISS to Bananarama to Super Furry Animals.

United is very much the word to describe this community; and while a number of supporters have been attending games at Jenner Park for over half a century, we are delighted to have a growing group of enthusiastic and committed younger supporters on board as well.

Home support at Town matches typically migrates towards the larger West Stand (known colloquially as the Old Stand); with some of the more vocal supporters often found across the central back row, under the television gantry.

One of the most infamous Barry followers is Terry The Bugle; a beloved senior citizen who plays his ever-present brass bugle to encourage the players and celebrate goals.

Colourful flags have also become a regular feature of Barry matches, and are often present for the team's away games, as well as at Jenner Park.

One of the most active fan accounts online can be found at www.twitter.com/StandUpForBarry 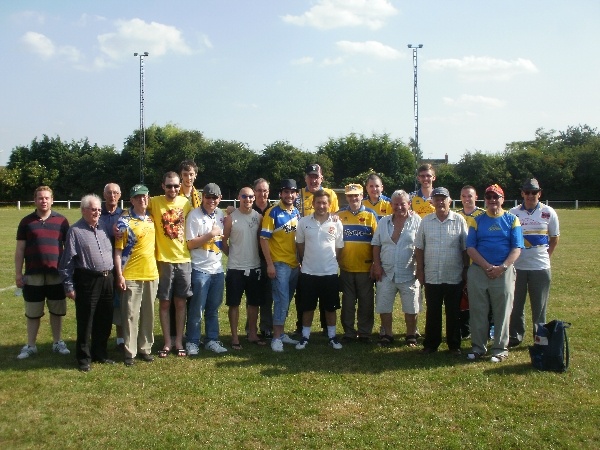