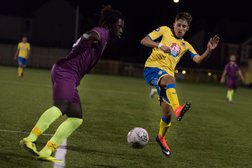 Barry Town United have secured a place in the Quarter-Finals of the Nathaniel MG Cup for the second successive season, after an entertaining midweek win over a game Afan Lido.

Lifted by their Saturday success at Bangor, Barry raced out of the traps; and Gavin Chesterfield's men would find themselves with an early lead, after Macauley Southam chipped Chris Curtis in the Lido goal to claim his first in Barry Town colours.

Unflustered though, the visitors from Welsh League Division One would equalise by the quarter-hour; Mark Curtis blasting his effort from distance beyond Barry goalkeeper Joe Massaro, who was making his first appearance of the 2017-18 campaign.

As the tie continued at an exciting pace, Barry saw an attempt to re-take the lead cleared from the Lido line; yet the visitors could not contain the Town's Louis Gerrard, who soon restored their advantage, with 21 minutes played.

Making the most of his starting berth, Gerrard would then strike the woodwork minutes later, before skipper James Saddler set up his in-form teammate with 32 minutes played; the midfielder-cum-forward dispatching his second of the night and Barry's third, to provide some breathing room at the break.

The second half beneath the Jenner Park floodlights saw Lido remain in the contest; with the boys in their unusual purple and lime ensemble scrapping for possession, against a somewhat experimental Barry XI.

Any attempt at a comeback though was scuppered at least in part, when Alex Gammond was given an early bath, for apparent dissent.

With 15 minutes remaining, the match burst into life again, as full debutante Mikey George saw his effort cannon off the Lido crossbar.

With Southam and Sam Jones also impressing, the game seemed all but wrapped up; yet Lido were not done and the three-time winners pulled themselves to within a single goal, as Josh Webber converted in stoppage time.

Nevertheless, it was Barry who would have the final say; Tyrrell Webbe scoring from a rebound less than a minute later to complete a 4-2 victory and secure the Town's successful passage to a Quarter-Final date with Cardiff Met.

The match, which is a repeat of the 2016 Quarter-Final, will be played at Jenner Park on Tuesday 24th October (7.45pm kick-off).