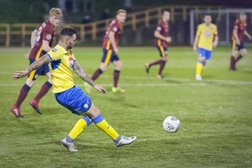 Barry Town United’s Nathaniel MG Cup campaign was ended at the Quarter-Final stage in midweek, as last season’s runners-up suffered a 2-0 defeat to an in-form Cardiff Metropolitan at Jenner Park.

Having won four straight matches on the bounce, the visitors made the short trip to the Vale in high spirits, yet it was Barry who enjoyed the first opportunity of note; Louis Gerrard firing an instinctive effort over the crossbar, after Met goalkeeper Will Fuller had failed to deal with Drew Fahiya’s cross.

Starting on the front foot, the Town almost found themselves with a one-man advantage when an overzealous Josh Barnett looked to pick up his second yellow card in quick succession. However, the Met midfielder escaped unpunished and would be astutely substituted by boss Christian Edwards.

As the half progressed, the visitors found their footing, causing increasing problems for a Barry Town side that had implemented four teamsheet changes from the previous weekend’s 2-0 loss at Bala.

They would soon be forced to make a fifth when Gerrard picked up a knock; and this enforced substitution would leave the side out of sorts, as the high-flying Archers capitalised to full effect.

In the 36th minutes, Met midfielder Chris Baker found the game’s goal breakthrough, receiving a pass from the left-hand side and firing a smart effort into the right-hand corner of Joe Massaro’s net; the young Barry goalkeeper making his second straight start in the Nathaniel MG Cup competition.

Then, two minutes before half-time, the visitors thought they had doubled their advantage, only for the official to swiftly put a dampener on the Archers’ celebrations, penalising for a foul on Massaro.

As in the first-half, Barry started the second period well, bringing substitute and danger man Kayne McLaggon into the game and adding the attacking threat of Callum Sainty, who impressed at Bala.

However, as would prove a theme in October, the Town’s hard-grafting players were unable to etch their names on the scoresheet, as the ultra-fit Met XI chased a second under the Jenner floodlights.

In one moment of note, a Met attempt from the cusp of the penalty area took a wicked deflection on the edge of the six-yard box. Seemingly goalbound, the spritely Massaro would though pull out an incredible reaction save to keep his team in the game; yet Barry’s resistance proved fleeting.

From the ensuing corner, Ben Bowler beat his man to the ball, sliding it to unmarked Emlyn Lewis at the back post. Lewis then left-footed home from close range, making the score 2-0 to the visitors.

This 77th-minute second effectively snuffed out Barry’s hopes of a second straight final and while a healthy crowd had turned out for the derby, they would witness the Town’s cup challenge end here.

Any chance of knockout silverware this season will now lie with the Welsh Cup, with Barry and the other JD Welsh Premier League clubs entering at the Third Round stage on Saturday 2nd December.