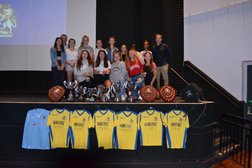 On Friday 31st May, the Ladies and Girls section of Barry Town Utd held their annual end of season awards night at the Memo Arts Centre in Barry.

With over 200 people in attendance including players, parents, sponsors and volunteers, club Chairman, Eric Thomas opened the evening to give an overview of the success throughout the club during the 2018-19 season.

In total 10 league and cup honours were achieved across the 7 competitive age group teams in attendance which were as follows:

In addition, the club made history by winning all 3 female South Wales FA Cups at U14, U16 and Ladies level.

Each team were welcomed to the stage to collect player trophies for representing the club during the season and individual awards were given to players who have excelled during the last 12 months.

Player of the Year
U12: Scarlett Gibbs
U13: Scarlett Davies
U13 Dragons: Maisy Antoniou
U14: Manon Pearce
U15: Ellie Davies
U16: Ffion Spence
Ladies: Alex Allen

Most Improved Player
U12: TBA
U13: Megan Bettley
U13 Dragons: Heidi Lawrie
U14: Gina Robinson
U15: TBA
U16: Taite Trivett
Ladies: Olivia Townsend

Well done to all the players who represented the club during the season and to those who picked up individual awards.

The club would like to thank everyone that has played their part in yet another successful season for the club including the players, coaches, parents, supporters and volunteers. We look forward to seeing you all after the summer break.