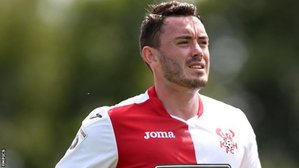 Barwell Football Club are pleased to announce the signing of Craig Reid from Coventry United.

Reid, who has played as high as League One with Cheltenham and Stevenage, is a 32-year-old striker.

The Coventry-born front man was in the Football League as recently as last year, when he played for Newport County under Graham Westley.

Following his release at the end of the season, he signed for local club Coventry United. So far this season, he has scored 14 goals in the Midland Football League Premier Division.

Reid also boasts the likes of Aldershot Town, Kidderminster Harriers, Lincoln City and Gloucester City (to name a few) on his impressive CV.

We would like to welcome Craig to the club and wish him luck for his Barwell career.